How to set carburetor for motorcycle 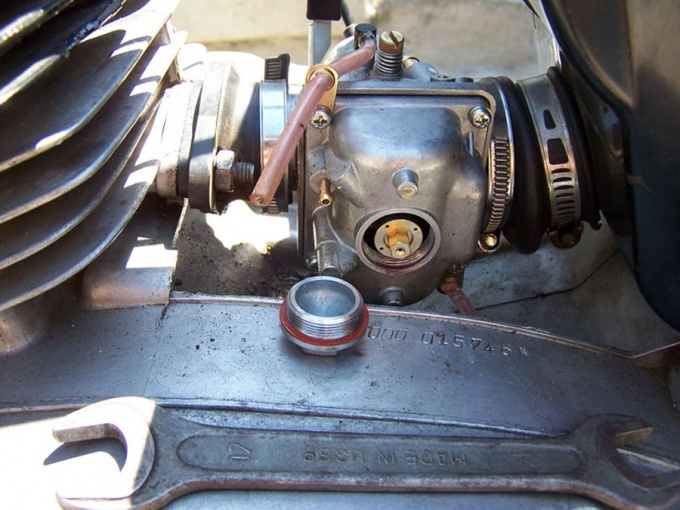 Related articles:
Instruction
1
Find on the body of the carb screw idle mixture. To enrich the fuel mixture a slightly lower idle speed wrap this screw. This screw regulates the work of the carburettor mode throttle opening to¼. On some models of carburetors to enrich the mixture need to Unscrew this screw. Resistant the idle screw can also find on the carb body. It limits the lowering of the spool of the throttle. Tighten the screw to lift the valve core of the throttle and increase engine speed.
2
Adjust the quality of the fuel mixture through the dispensing needle, which can be attached in different positions spring loaded. Adjustments submitted via this needle, affect carburetor operation mode ¾ to full speed. For the enrichment of the fuel mixture install the spring latch in the lower groove. For the lean, move the clip to the top. On some models of carburetors latch is adjustable in 8 different positions. In addition, the needle can be mounted without a latch.
3
The quality of the fuel mixture for the operation of the carburetor in the full stroke, adjust the selection of the main nozzle with the sprayer. The selection of this nozzle will also affect the operation of the carburetor in all modes. In various carburetors needle valve can be positioned both horizontally and vertically. If there are multiple grooves on the shut-off needle float chamber adjust fuel mixture for all operating modes. To impoverish the mixture, move the needle higher, relative fuel level in the float chamber.
4
On carburetors with missing system idling adjustment of spending by the metering needle, main fuel jet, and the thrust of the idle screw. On the carburetors of old patterns and simplified carburetor adjustment run, varying the gap under the throttle valve with fitting-emphasis.
5
Before adjusting the carburetor, run the engine. Start with the IAC. On the cover of the mixing chamber screw the thrust screw until the end. Candle install clean and reliable. The four-stroke engine set later than the ignition. Start the engine and close the hand valve of the throttle. If the engine stalls, start to slowly Unscrew the stop screw the idle speed up until the engine will not be operating steadily with the throttle closed.
6
Then screw the quality (composition) of the fuel mixture will put the maximum engine speed. Then screw the idle speed decrease idle speed until the appearance of signs of unstable operation of the engine. Thus, adjust the carburetor, alternately increasing the revs by a lean condition and reducing the rpm by reducing the size of the gap under the throttle. Upon reaching stable operation of the engine idling at minimum speed, loosen the adjusting screw of quality of a mix in ¼ turn and lock it, preventing displacement of the set position. Note: if the carb is worn, qualitative adjustment of idling to achieve not to turn out.
7
When you adjust the carb on the secondary modes keep in mind that when moving the dispensing needle up will increase the throttle response of the motorcycle and increase fuel consumption. If throttle response and fuel consumption is satisfactory, do not move the metering needle. If the spark plug is clogged with soot, will obecnice fuel mixture, lowering the metering needle one or two grooves. To eliminate detonation and reverse flashes in the carb, raise the needle 1-2 positions.
8
If full-stroke engine does not develop full power, test the operation of the carburetor with a different size main fuel jet. To increase the power of the engine should be set to jet with a capacity 10-20% higher.
Is the advice useful?
See also
Подписывайтесь на наш канал