How to build a trike

Trike – three-wheeled vehicle made from the front of the motorcycle and the rear of the car. Has a high comfort, bright appearance, stability on the road. Self-built trike depends entirely on the imagination and possibilities building. However, to register it will be more difficult than to build. 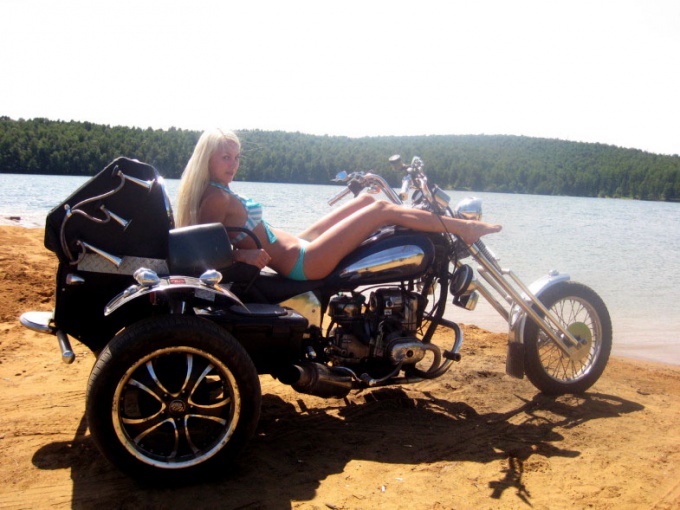 Related articles:
Instruction
1
You must determine the layout of the trike. If the engine you plan to install the rear, best as the power unit to select the motor ZAZ-968 or Volkswagen Kafer. For front-engined layout it is recommended the engine from Ural or Dnepr. This is a classic solutions. In fact, you can choose any engine along with suitable to her transmission.
2
Rear axle trike must be securely fastened to the frame and to be movable in the suspension travel. Of the domestic components is often chosen as a bridge between the classical Muscovite, and rear suspension is from the VAZ-2101. "Moskvitch" the bridge has a suitable ratio of 4.3 and wheels fit for him from Toyota. Hence the wheels from R13 to R17, and on these wide tires from any SUV.
3
The rear part of the original motorcycle cut and welded the frame. It is made from a plate in the front and thick-walled pipes with a diameter of at least 20 mm. Before cooking the frame, make a layout: on the print or in the imagination of the frame can look in a different way, like in a real incarnation. The layout will help to determine the final configuration of the frame. Don't forget to reinforce the frame rails.
4
Weld to the rear axle and the frame mounting points of the suspension. The shock absorbers from cars will not fit: the easy trike suspension will be awfully hard. Use shock absorbers from motorcycles to heavy (same Ural or Dnepr).
5
When mounting the propeller shaft to the preferred the following arrangement: the grip should be with the damper disk, the crossbar closer to the gearbox, universal joint at rear axle gearbox.
6
The rear brake is better automotive-type with hydraulic drive. The front fork can be rented from the Ural or Dnieper, greatly strengthening it. To the front forks were as good as you can make it yourself. The shock absorbers use a motorcycle. Front wheel take from imported motorcycle.
7
Given that motorcyclists like to install on the trike for several primary, secondary and fog lamps and additional lighting, high-end music center, etc., the generator is better to choose as powerful. 40-50 Ampere – optimal value.
8
The fuel tank will have to be redone from the motorcycle by cutting in half and welding panels, but better – with chrome strip. Alternatively, in the standard tank to install the dashboard and electronics, and to install another fuel tank, for example, in the passenger seat.
9
Take the exterior trim. Install pads, fairings, housings, veneer, steps – all depends on the intended appearance of the trike. With a good power generator, you can think about a powerful sound system.
Note
The finished trike should weigh not more than 400 kg, to come under category A.
Useful advice
Currently you can buy a ready made trike: homemade either domestic or imported industrial production, with all necessary documents and certificates.
Is the advice useful?
See also
Подписывайтесь на наш канал