How to hold the dart

Darts is a game which consists in throwing Darts into a round target. In the UK Darts is a national pastime, but no less popularity it enjoys all over the world. In Russia there are more fans of this great game. Despite its apparent simplicity, this game has so many nuances that are crucial. The first challenge faced by a novice Darts player is the ability to hold the dart. 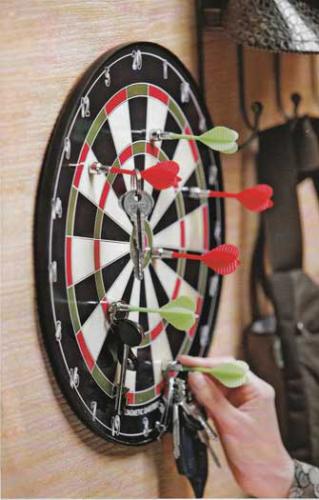 Related articles:
Instruction
1
Select a dart. Until you learn the correct way to hold a dart and make shots, use a standard tail and a medium length dart. In the future use the only one model of the dart that suits your manner of play. Remember that the dart is necessary to select each individual person, as well as individually select points. Not accidentally there are a huge number of different models of the dart. What is ideal to one player, will be absolutely unacceptable for another. After all, each player has its special manner of move, hold her hand, make a swing...
2
Determine the center of gravity of the dart. To do this, put it on your finger and trim, moving the dart forward or backward. When the ends of the balanced, middle of the dart will lie on the finger.
3
Place your thumb directly under the found center of gravity, and index and middle on him. Firmly grasp the shaft of the dart.
4
Stand freely, slightly sideways to the target. Toe toe of the right foot touches the line but does not cross it. To begin, do not move during the throw, put before crashing on the line box. This will help to develop the skills of the right post.
5
Raise the dart at about eye level in front of the face. Shoulder steadily fix - it should be fixed, and the forearm should move freely.
6
Completely relax your wrist. A dart while aiming needs to specify the top, but should not protrude vertically. The sharper and stronger your shot is, the smaller must be the angle. Some experienced players fully align the dart horizontally on the same line as the target. You should learn how to throw a dart on the parabola and with increasing experience, to reduce the curvature of the arc of flight.
7
The body should be steady. So the left hand doesn't distract you (if you're right handed), press it against the belly or behind your back. To shorten the distance to the target, you can gently lean forward.
8
Do not throw the dart like a ball. The force of the throw should be achieved only by the movement of the forearm and wrist.
Note
The javelin is a throwing weapon which is a spear, somewhat reduced and lightweight compared to spears for equestrian or melee
Useful advice
Dart. or throwing a spear - weapon, replacing some of the peoples of the boom. The arrowheads are made of stone, solid wood, bone or metal. Sometimes the tip is attached to a special curved shape to the dart rotated spirally in flight and would fall with more force.
Is the advice useful?
See also
Подписывайтесь на наш канал