How to play Darts: rules

Games in which the excitement connected with defined physical effort, has always been popular. Darts is one of them. But to the fun of the game was more complete, it is necessary to aspire not only to participate but to win. How to make Darts was not only enjoyable but also productive? 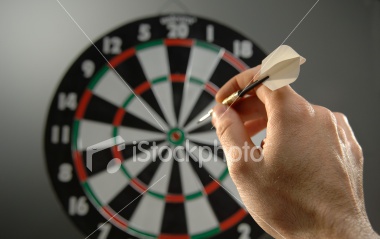 Related articles:
Instruction
1
First of all, the stand from which you make the throw, should be easy: the body weight is shifted on one leg; a hand in which you hold the dart slightly laid back; you can do swing without disturbing the balance of the body. Don't forget that you must not overstep the boundary throw — usually it is of 2.37 meters and are marked with special bar. Standard target is at a height of 1.73 meters from the floor.
2
The number of shots in one go is three. If your dart just touched the target and rebounded from it, or dropped from the target during the throw, this throw does not score (although according to some rules you continue throws until the target established at least one dart).
3
The target is divided into sectors, for getting into which is credited a certain number of points, from 1 to 20 — they appear on all the sectors. For sectors closer to the center of the target is the outer thin ring — double, it means doubling the score of the sector, followed by the inner narrow ring — treble means triple points. Traditionally, these narrow rings are painted red and green. The center of the target surrounds the wider green ring, getting into it will bring 25 points. Well, in the center is the so-called bullseye, or bulls-eye, it is red and worth 50 points.
4
Usually each player starts with 301 accounts (as an option — 501), and what subtracts from that number the points received until it reaches zero. If the last cast has brought more points than necessary, it will not count and the turn passes to the next player.
5
With Amateur the game of Darts throws can be made across sectors at random, but usually the rules have to hit the sector at a time, from 1 to 20, then double, treble, and finally the bullseye. If all three shots reached the target order (e.g. 1, 2, 3), the queue remains in that player, and he can throw on. The winner is the one, who first hit the bull's eye — in the truest sense of the word.
Note
In professional Darts there is still a lot of rules — for example, a ban on jeans and Smoking during the game, but if you are just going to play the warm company, is sufficient to fulfill basic conditions. Well, of course, the more training, the higher your score!
Is the advice useful?
See also
Присоединяйтесь к нам
New advices