How to draw a wardrobe

Basically any wardrobe is a box or large box. You first need to learn how to paint bulk box from all angles, and then flesh out the details, drawing the actual wardrobe. 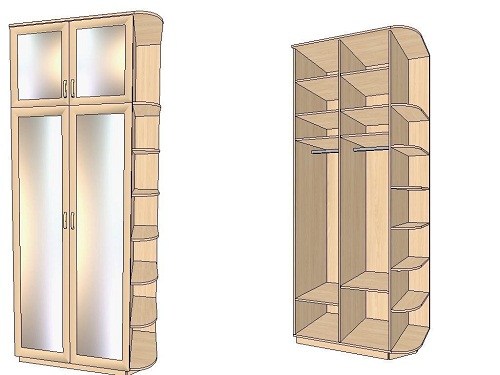 Related articles:
You will need
Instruction
1
The picture on the paper. The beginning of work.Select the desired angle wardrobe. Think about the future. First draw the base of the parallelepiped. Ensure that the proportions were followed correctly. Now, the subtle touches we need to identify the shadow falling from the wardrobeand, if necessary, that he "stood" in the figure. Shadow can not decide if to draw a sketch or a blueprint for the future of the furniture. In any case, the sketch of wardrobeand intended for collectors, not too different from just drawing. More precisely, the sketch is done more carefully and exploded, and it specifically lists the sizes, colors and materials from which is made the future of the product.The picture will require attention to detail not in the sense of precision guidance for future collectors, and in order to was recognized the style and layout of wardrobeand from the point of view of artistic expression and decoration.
2
The picture on the paper. Clarification of details.The picture of the future Cabinetand mark the locations for doors, mirrors, decorative elements. If there is a beadings decorations and plates, it is necessary to identify them by thin lines, and carefully follow that line drawing was straight and when rendering large parts is not disturbed by the prospect. If needed, parts will have to plan on the line.Put shadows under the large, protruding detail and in all available projections. Carefully draw already previously planned shelves, beadings, linings, mirror frames and the outlines of patterns, make the study of color.
3
Computer graphics. The beginning of work.To draw a realistic wardrobe on the computer, like in Photoshop, traced in the run box first, apply the material-the texture, then gradually simulating shadows and gradients carefully plan the details.
4
Computer graphics. Detailing and giving volume.The details of the wardrobeand show with the help of changes of gradients at selected sites. Gradients are superimposed on one another, creating a play of light and shadow, and if they are correctly matched, do not have to draw separate objects using lines.The same gradients denote the projections or recesses, and a translucent shade in a few layers make the image three-dimensional, convex.
Don't forget about the distortion effects that create on flat surfaces need a flare to give an object volume, organizing two-dimensional screen space into a three-dimensional image.
Note
Try both technical and artistic drawing to follow the term and to prevent distortions and misguided lines.
Useful advice
For professional sketches of furniture to build a drawing in professional programs such as Bazis Konstruktor and the like.
Is the advice useful?
See also
Подписывайтесь на наш канал