How to pump up the biceps on the bar

Large, pumped up biceps is the dream of any man. We diligently hit the gym, this dream became a reality. But sometimes it so happens that of the available tools at hand even dumbbells, not that specialized E-Z rod. In this case, we will help the bar. The effect, of course, not as good as when training with weights, but to pump up the biceps on the bar it is possible if you treat the exercise seriously. 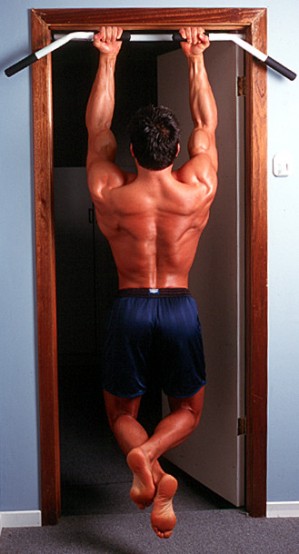 Related articles:
You will need
Instruction
1
First and foremost, start with a warm up. Mash the shoulders swing movements gradually speeding up the process. First do alternating swings with both hands clockwise, then counterclockwise do.
2
Grab a brush for the horizontal bar reverse narrow grip. Pull up to touch the chin to the crossbar as slow as possible, with the effort of straining the biceps. Then slowly get down on the outstretched arms. Repeat this exercise eight to ten times, do five or six approaches.
3
Grasp the straight bar narrow grip and pull up to touch podborodka the crossbar. The tempo should be the same as in the previous exercise. Do four sets of eight repetitions, each with the effort of straining the biceps.
4
Use a belt with weights. The most important thing is that the weighting increases the weight of your body for fifteen to twenty pounds and was securely fixed at the waist. Grasp the horizontal bar reverse grip, if necessary, use straps. Sharp movement pull up to touch chin on the crossbar and down on the outstretched arms. Do five or six approaches of eight repetitions each.
Useful advice
Maximum rest between repetitions should be no more than one minute.
Is the advice useful?
See also
Присоединяйтесь к нам
New advices