How to slice jamon

Ham or Jamón is a Spanish culinary specialty, it is divided into two types – jamon Iberico and jamon Serrano. Both dry cured ham, made according to special technology of meat special pigs. Jamon Iberico receive from black Iberian pigs, Serrano from white pigs the Jersey breed. Jamon Iberica de bellota is the most expensive. All types of ham made from hind pork legs, ham from the front bears a different name. 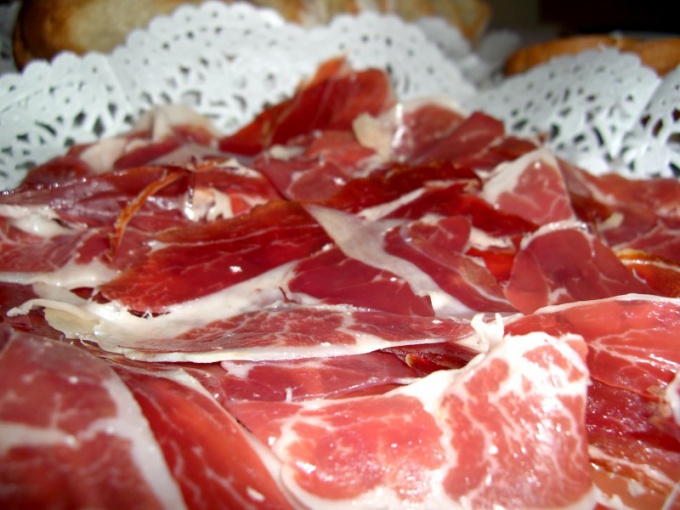 Related articles:
You will need
Instruction
1
Ham stored in a cool dry place at temperatures from 10 to 15°. Cut the ham when it will be warmed up to room temperature (21оС), and grease it will Shine. The slices should be thin as tissue paper and each need to leave a little fat to give it juiciness. Ham is not cut in advance and not to store cut. Exception – sliced in vacuum packs, but real connoisseurs believe that they are due to machine cutting and this method of storage will lose some aroma and flavor.
2
Traditional holders for ham are Jamoneros. They consist of planks solid wood, lock and special hinges with screw key – these parts are made of stainless steel. He leg is divided into the following parts: the thickest maza, contramaza, below it is the front part of the ham and the part around the hoof. If you are not going to eat the entire ham at once, begin the cutting with the narrow part, contramaza, as it is believed that this area quickly becomes too dry.
3
Place the ham in the holder, securing the hoof in the loop screw. If you want to slice the entire ham at once, start with what you cut away all the skin and the top fat. If you're cut off from it a little, remove them with a small piece. The skin just slide off the leg, so that then it was possible to cover her and the remaining fat meat. Remove fat and skin with small sharp knives.
4
Take ham knife – narrow, long and flexible. Check whether it is sharpened, if necessary, correct sharpening. Cut the meat into thin transparent slices, toward you, holding a plate of ham up a bit. Meat about the bones later.
5
When you're finished cutting the ham, cover the remainder with pieces of fat cover with skin. If skin and fat is not enough, put the cut wax paper for baking. For extra protection, cover the ham with a towel. Turning to the cutting of the bottom side, flip the ham in the holder.
6
After you cut almost all the ham, continue to meat on the bone. Cut it into small knives thick slices, cut on a Board into cubes. They put them in soups and various stewed dishes. The bone sawing into pieces and added to soups and stews to impart the unique smoked flavor. Pieces of bone can be frozen and stored in the freezer.
Is the advice useful?
Присоединяйтесь к нам
New advices