Do I have to soak the eggplant in salt water

Some recipes and articles meet guidelines for soaking the eggplants before roasting in salt water. This is done in order to deduce the bitterness. Some Housewives adhere to these recommendations, others argue that the bitter eggplant does not exist. So whether you want to soak the eggplant or just going down? 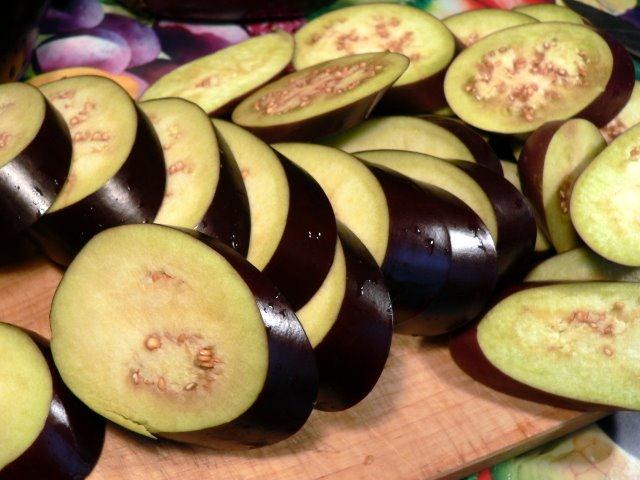 To get rid of the bitter taste eggplant can if before cooking, slice them in cubes or slices and 20-40 minute soak in salt water. They can also be sprinkled with salt, wait until they let the juice, and rinse it under running water. Eggplant bitterness is often concentrated in the peel of the eggplant, that may taste bitter from over ripeness, drought or cold, however modern varieties of this vegetable are protected from rancidity new breeding developments.

Often the bitterness found in unripe or overripe the eggplant, which is easily identified by the dark seeds and tough fibers. Greenhouse eggplant grown at the optimal temperature and sufficient moisture, can be purchased all year round. They do not taste bitter, however, unfortunately, inferior soil eggplant for its taste. Total, eggplant can be soaked in salt water, focusing on the methods of cultivation, degree of ripeness, varieties and recipe dishes for which they are soaked.

Tricks of cooking eggplant, you need to know

When buying eggplants, always try to choose vegetables with the darkest skin because they contain less bitterness than in the rest of the eggplant. Also the fruit should be shiny, firm and have fresh green stalk. Never buy eggplants with spots, wrinkled skin or brown stalk – they were broken for a long time and lost all of their beneficial nutritional properties.

Try not to cook eggplant with potatoes, because it negatively affects their taste.

In addition, the eggplant there is one feature – while cooking, they like a sponge, absorb a large amount of vegetable oil. To avoid becoming too fat, cut them, soak for 20 minutes in salted water and squeeze – after this, the eggplant will absorb much less oil. They should fry in a hot pan, and in the first minute you can do it without the vegetable oil, adding it gradually after roasting. Fried eggplant are best combined with peppers and tomatoes, so to serve them better with such a side dish that will accentuate their nutty flavor.
Is the advice useful?
Присоединяйтесь к нам
New advices