How to identify palladium

Palladium – a chemical element under number 46 in the periodic table. He is a noble metal of platinum group, was opened in 1803, the English chemist Wollaston. It received its name in honor of the large asteroid Pallas opened a little earlier (in 1802, the year). How to distinguish palladium from other noble metals? 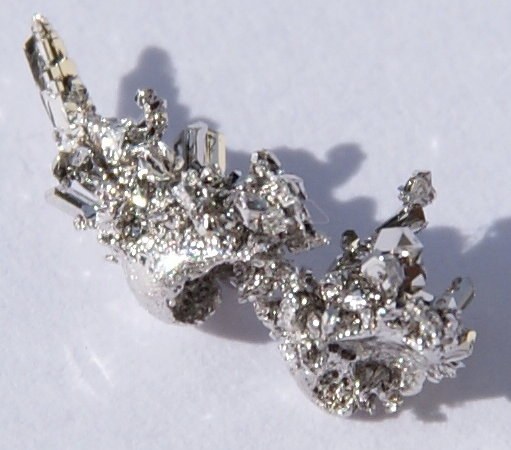 Related articles:
Instruction
1
If there are enough samples of pure metals, similar in appearance (for example, palladium, platinum, silver), it can be relatively easy to distinguish them from each other, defining the density of each of the samples. Since the density of pure silver is about 10.5 grams/cubic centimeter of palladium – about 12 grams (more precisely, 12,02), and platinum approximately 21.4 grams. But of course, this method is only acceptable for very pure substances, in which the content of impurities is relatively small.
2
Accurately distinguish palladium from platinum, you can try dissolving a piece of the substance in hot nitric acid. Palladium will dissolve, platinum no. It dissolves only in the famous "Aqua Regia" (a mixture of hydrochloric and nitric acids), and when heated. In cold Aqua Regia reaction is very slow.
3
Geologists, and analysts widely used qualitative determination of noble metals on the assay of the stone. It represents a specially made plate of a certain type of silicon shale. This testing stone has the following properties: it is very hard, inert to aggressive chemicals (including strong acids and their mixtures), has a fine-grained structure.
4
Qualitative analysis (test) this stone do this: take the test metal (or its alloy) and carried out, with a palpable pressure on the surface of the plate. The trail should be well defined, have a length of about 2 inches. Then act on the trail of a specially prepared reagent and see what the result will be.
5
If the line left by palladium or its alloy, when the action of a reagent consisting of a mixture "Aqua Regia" and a 10% solution of potassium iodide, occurs quickly bright, clearly distinguishable red-brown stain. This is because during the chemical reaction produces a substance К2PdCl4 — tetrachloropalladate potassium.
Useful advice
Palladium finds very wide application in organic synthesis (catalyst), in electroplating and electrical engineering, medicine, in the manufacture of high-precision measuring instruments. When adding even very small amounts of palladium to gold, it takes strength and characteristic color ("white gold"). Palladium is a precious metal and therefore is used when trading on the exchange and OTC markets.
Is the advice useful?
See also
Подписывайтесь на наш канал