Favorite culture gardeners — cucumbers. Cucumber is a moisture — loving and heat-loving plant. Cucumbers grow well in the greenhouse with peppers, unlike tomatoes, which are well accustomed with eggplant. To be able to change the place of planting crops, it is better to have two greenhouses. One for cucumbers and peppers, one for tomatoes and eggplant. 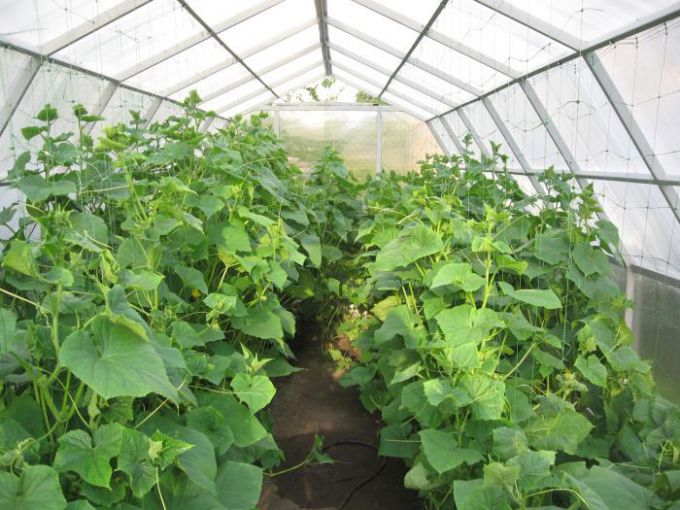 Holes for planting should be prepared in advance about a week before planting. The distance between the holes of about 60 cm Hole should be done in a staggered manner. This is done in order to change the landing site from year to year.

To cucumbers fruited as long as possible, it is best to plant varieties with different ripening times. It is convenient to make the first row for an early harvest. And in subsequent rows to plant later varieties in a week or two after the first landing.

In order that the cucumbers had a sweet taste, they need potassium. For plant nutrition potassium you can use ash and vermicompost.

Before planting the seedlings the hole needs to throw warm or even hot water. Comfortable soil temperature for planting cucumbers 26-28 °C. By the time the last watering hole the first has time to cool, so you can use the watering can hot water. Before Strait in the hole, add ash and vermicompost. The mixture of water and ash gives a strongly alkaline medium. In order not to damage the root system of seedlings, the ash should be mixed with soil.

Cucumbers have a very delicate root system, so the cucumbers don't need to weed. Weeds in the garden cut, not weed. For this reason, planting cucumbers should be no later than the appearance of the second leaf, while the root system is not very well developed and better preserved for the transplant.

After moving the seedlings in the ground, the ground around the plant is compacted and make a small hole for watering. Bushes need to be fed.

Water the cucumbers with warm water, and top sheet of cucumber. Watering with cold water can cause "disease" of plants and the massive dying off of the roots. It is impossible to water the cucumbers with a hose, the soil will erode and the root system may be damaged. Before the period of flowering seedlings watered every 5-7 days, then every 2-3 days.

As the cucumber vine, the bushes need to be tied up. Necessarily the first node do the cotyledon leaves, then tighten up to the plants in the future fell.

In about a month will appear the first fruits.