How to grow cucumbers in the open ground

Cucumbers – one of the most popular garden crops. Homeland cucumbers considered to be Italy, although since ancient times it was grown in Greece, Rome and Africa. Grow cucumbers in the home and in the open ground, while respecting all the rules care. 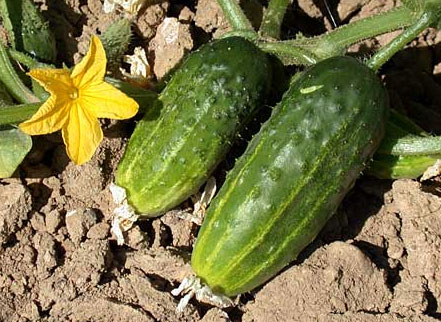 Related articles:
Instruction
1
Landing. Grown cucumber seedlings and nonseedlings method. For seedling method of cultivation of cucumbers need sowing seeds for 3-4 weeks before planting in open ground. To speed up the process of germination, you need to soak and sprout seeds. On the open ground seedlings are planted only after he is well warmed up. If you decide to plant cucumbers nonseedlings method, germinated seeds need to be repaired to a depth of 1.5-2 cm in warmed soil.
2
Soil, perfect for planting cucumbers, should be loose, fertile and good moisture retention.
3
Temperature. For good development of cucumber optimum temperature is 20-30 degrees. If the temperature drops below 10 degrees, there is a cessation of growth and oppression of plants. Also unwanted, and temperature extremes.
4
Fertilizer. In view of the fact that the root system of cucumbers is small, organic fertilizers it is recommended to introduce locally, i.e. the soil for planting cucumbers to prepare in advance. To dig a hole depth of 30-40 cm stack of organic fertilizer, then mix with ground and covered with clean top soil. After that you can start planting cucumbers. Into the sun organic matter decomposes, releasing heat, which positively affects the growth and development of cucumbers.
5
Care. Cucumbers at the stage of formation of growth should pinch back. Also during growth and development follow regular watering and weeding. If necessary you can provide additional feeding cucumbers. Loosening is one of the important conditions for growing cucumbers, because their root system constantly needs air.
6
Watering. During active growth and ripening of fruits regularly and abundantly watered cucumbers. Due to the lack of water the cucumbers grow up with a taste of bitterness. Watering should be warm water.
Note
On a plot of cucumbers can be grown in the wells for onions, the cabbage, the edges of the potato and strawberry ridge, planting 2 to 3 plants per hole. To such sow cucumbers directly in the soil in June. Typically, when growing cucumbers in the open ground pinched do not, since they form a sufficient number of female flowers on main stem and shoots of the second order.
Useful advice
Fruits in the garden – how to grow cucumbers in the open ground. The main vegetable crops. Home made pickles, grown with their own hands on their own plot, much tastier than store-bought. Although this vegetable crop is quite demanding conditions, likes warmth, moisture and a certain climate, however, with the help of growing cucumbers in the open ground can be achieved more brilliant results than in the greenhouse or in a greenhouse.
Is the advice useful?
See also
Подписывайтесь на наш канал