What are the features of growing cucumbers in the open ground

Cucumber is quite a popular vegetable crop. They are well grown almost everywhere. Often cucumbers are planted in the greenhouse, but also outdoors such vegetables grow well. Suffice it to know about the features of any one variety and his interest in the country secrets of growing cucumbers in the open ground. 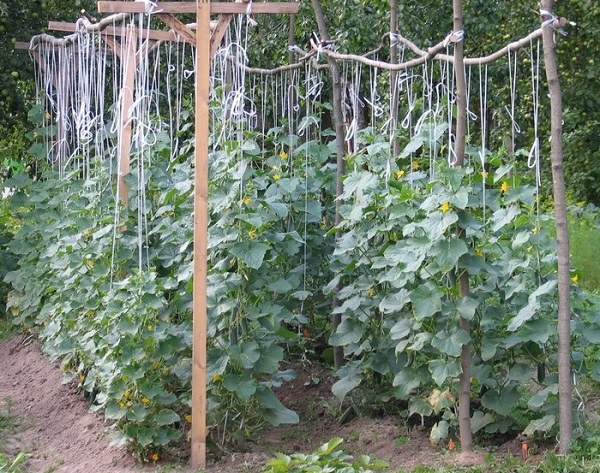 In order to successfully grow cucumbers in the open ground, you need to decide whether for a given vegetable crops the selected area. Remember that cucumbers love the heat and light, so the area you need to choose a well-lit and warmed by the sun. Seeds will delight you with its crop for enough light, fertile soils. Well, if the soil near the site is the reservoir, whereby the air throughout the day to be hydrated.

Of course, the best soil for cucumbers is loamy permeable, but is also well suited Chernozem soil or drained peatlands. Using the right cultivation techniques, cucumbers can be grown on heavy clay soil. To improve such land, in the fall, you should fertilize it with materials such as compost, manure, peat. And for the power and oxygen plants is recommended every year to fertilize the land of fresh cow manure.

Seed and methods of sowing

For sowing it is better to take the seeds that were used 2-3 years ago. As the plants grown from such seeds are formed in female flowers, the fruiting they will come first. The best time for seeding is late April or early may when the soil has time enough to warm up and freezing safely retreated.

Using two methods of sowing of cucumbers in the open ground: horizontal, vertical.

The first method, the horizontal at which the bed is good the water is poured out. Are deepening at a distance of approximately 30-40 cm, in each of which is sowed with 5 seeds, and then covered with soil. About a week later, the sprouts are beginning to be thinned, but can't pull them out, it is better just to cut.

The second method, the vertical in which the grooves cucumbers are sown in pre-prepared beds in increments of not less than two feet from each other. In this sowing cucumbers always grow on the ground and need to try not to flip.

How to care and collecting?

It is important that the cucumbers were enough lighting and the distance, in order not to hit shadow. In courting this vegetable culture includes: watering, weeding, hoeing, protection and feeding. You need to collect them after they have reached their standard size early in the morning. Cucumbers should not be stored in the room, otherwise they will be soft and will start to fade. For safety they are best kept in the refrigerator.
Is the advice useful?
See also
Присоединяйтесь к нам
New advices