How to draw anime in stages

Anime is a drawing style which was invented in Japan. The word came to mean, and the cartoons themselves. A beginner artist to draw manga is difficult, but gradually to depict the heroes will be easier. 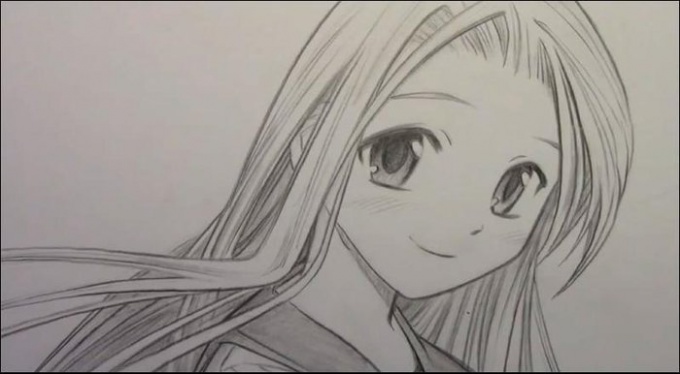 Related articles:
Instruction
1
Determine what is the character you want to draw. This is necessary in order to anatomically correct to portray the character. The growth of a young person is usually equal to the height of 8 heads. The body of a little girl, as a rule, smaller than the head.
2
Draw two horizontal (shoulders and pelvis) and one vertical (spine) lines. From the shoulders and pelvis swipe two lines down and two - up respectively, which connect in the middle of the spine. The resulting triangles are the template for the body.
3
Over-the-shoulder draw a circle (head). Depending on what age and gender your character, draw the chin, face and hair. Need to know what the correct distance between eyes is one eye. Nose anime character is easiest to represent a straight vertical line, the end of which is bent upwards.
4
From the shoulder joints, draw two straight lines (hands). Each of the two ovals. Limbs will be depicted correctly if the elbow will be at the level of the belly. If you create a physically strong character, draw muscles.
5
From the pelvis, draw two lines (legs). Draw ovals, as in the previous step. Limb length should be 4 the length of the head of the character. The remark about the muscles of the hands and apply to the feet.
6
Flowing lines connect the two triangles, ovals, and a head and torso. Erase the reference line. Remember, if you draw a girl's chest is portrayed not in the form of two balls, but ovals, which stretched down. Otherwise, this part of the character will look unbelievable.
7
Draw the details. Consider what time and in what conditions there lives the character. This will directly affect the kind of clothes you want to portray. If it is in the Arctic, it would be logical to draw a warm jacket with a hood, pants and shoes. If the character was born in the year 3045, and clothing should be appropriate.
Useful advice
If you Ruslanovich sheet for a few frames and draw varying character, you get a page from a Japanese comic book (manga). It is on this basis create the majority of anime.
Is the advice useful?
See also
Присоединяйтесь к нам
New advices