How to draw your manga

Children love to create a clean sheet of their masterpieces, or sometimes to convey thoughts and desires through art. The process was exciting and fruitful, you need to learn how to draw your manga. Make her the most likely way to revive the contours of her body. 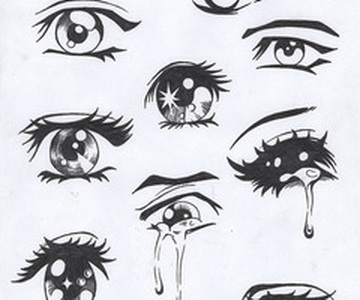 Related articles:
You will need
Instruction
1
Use at first the templates to create drawing manga, but then you can start painting yourself.
2
If you want to start drawing manga without the use of templates and transfer paper, you will first need to understand the features of the image of this hero. Draw a head, like a bulb or direct oval. These forms are characteristic of manga. The hair of girls and boys can be of arbitrary color and shape.
3
Neck boys different from the girls neck with his thickness. Draw a manga boy with thickened lines of the neck and shoulders, and the girl, on the contrary, with smooth and thin lines.
4
Manga is often drawn with the wasp waist so that the girl should resemble a triangle with the apex at the bottom. In this case, the triangle should not be wide. The boy's body is drawn the same way as in girls, only the emphasis is on the base of the triangle (the shoulders).
5
Limbs in manga have to initially draw in the form of elongated ovals connected by a small line. Thus, a layout, ligaments and tendons. Then connect all the lines smooth gestures and get the character in the animated series.
6
Pay special attention to the face the Eyes the girls are drawn in the form of ovals, and large. The boys eyes are in the shape of an oval or more rectangular. The nose is a small area or even two points.
7
Lips draw using two stroke: horizontal stripes and a semicircle under it. So you draw a happy face. To show anger, simply draw a horizontal bar and to focus on the eyebrows.
Note
Do not overdo it with long limbs and eyes. Focusing only on them will be able to forget about the importance of conveying the emotional state of the hero.
Useful advice
To make the manga look more bright and have been performed correctly, certifite black pencil lines of the face and extremities, do bright eyes. Manga is the image of a toy man, so give him the image that is dolls with big eyes, small nose and long limbs.
Is the advice useful?
See also
Подписывайтесь на наш канал