How to draw Sasuke

Fascination with Japanese anime cartoons of today gaining more and more fans. Many people dream of learning to draw in anime style, to create your own comics and cartoons, but even more fans of the genre wants to learn to draw their favourite characters feature-length cartoons and TV series. Knowing the basic principles of drawing anime characters, not that hard to draw any cartoon character. You'll need a pencil, a sheet of paper and the image of the hero, which you take a sample, for example, Sasuke. 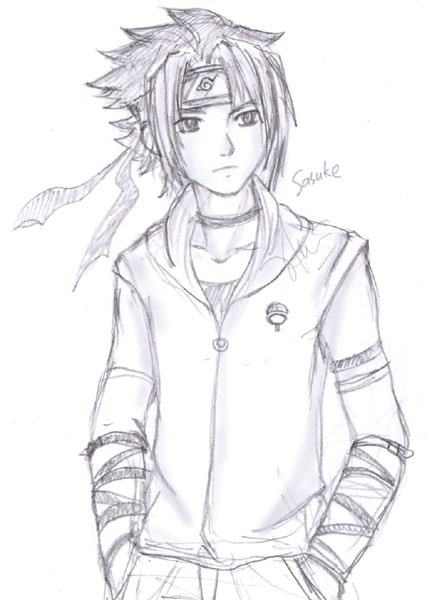 Related articles:
Instruction
1
Start with the item that distinguishes anime characters from any other prominent and expressive eyes. Draw a slightly curving eyebrows and back away from them down a centimeter. At the level of the indentation guide line. This feature will be the lower border of the eye.
2
In the space formed by the eyebrows and the lower line, draw circular eyes, in which the draw half-ovals of the pupils with small circles-glare.
3
Around the eyes smooth draw is proportional to the round – top of the head. From the sides of the circle, draw two slanted lines, aimed down towards each other. Finish their jawline. You got a cone – shaped face-now the construction lines can be erased. Draw the nose as a small area.
4
Mouth you can draw in different ways, depending on the emotional background of the character. You can draw down, stepping back a little from the nose, short dash, and under it – a point.
5
Go to drawing hairstyles. Draw a long ragged strands of hair on the sides, short bangs and tousled hair back.
6
Move on to drawing the body – make it a graceful, tapering at the waist. Finish the shoulders, arms and hands. Legs draw so that your character is standing, put one foot back. To do this, draw one leg slightly longer toe on the viewer, and the other shorter, flattened to the side.

Finish the costume of the character and paint it to match the original.
Is the advice useful?
See also
Подписывайтесь на наш канал