How to cook broth

Properly prepared broth is not only a base for soups, but a full-fledged separate dish. Most often, the desire to cook the broth occurs in the winter, because it is not only nutritious, but warming food. 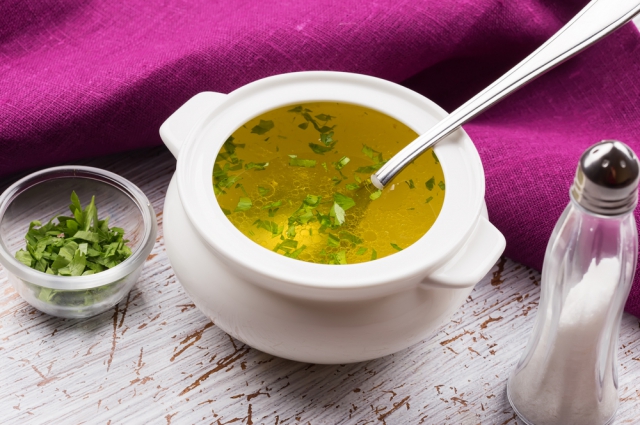 What utensils to boil the broth

The taste will remain unchanged and will not go bad, if you cook it in a pan of stainless steel. Enamelware is also nice, the only thing it wish is it should not be chipped. The broth should not reach the edges of the dish, and therefore, choose a large pot.

What kind of meat to cook the broth

For the broth you can use any part of the carcass, whether it is rump, shank, loin, rump or any piece from the back or chest. You can take a piece like a bone, and without it. The broth will be more nourishing if the bone before cooking to cut.

If we talk about fat, here everyone decides for himself. The broth of fat meat, of course, will be more interesting and rich. But the excess fat can also spoil the dish.

The broth will be more nutrients if the meat is chopped quite finely. For boiling meat broth diet in General can be crushed like a kebab, only after its important to drain.

It all depends on the ultimate goal. If you need a delicious rich broth, then pour the meat with cold water. If it is important, that the meat was delicious, then drop it in hot water.

In a five-liter pot, we need kg soup set (meat and bones). The amount of liquid should be reduced, if you like strong broth.

If you want to cook a delicious broth in the process in any case, don't refill water. Never. Otherwise, its taste will change for the worse.

How to cook broth

To make the broth turned turbid after boiling, reduce the fire. Water should not gurgle. And be sure to remove the foam.

Again, if you want a nice light broth, the pan should not be covered with a lid. But rich broth will be only at the closed pot. Here everyone decides for himself.

If the meat is not too young and it is feared that it will remain hard, add a little soda.

How to lighten the broth

The easiest way to lighten the broth immediately after boiling, drain the water. But rational it is not, because the nutrients will be lost.

If happened so that the foam when boiling has not been removed, you can add in a pan a little cold water foam will rise with repeated boiling. However, the taste of the broth will suffer.

To lighten the broth to use the backstay. This becomes loose egg white and poured into a pan. All the dirt and haze protein will absorb, you will only strain the broth through double-folded cheesecloth.

How to improve the taste of the broth

To cook a delicious broth in it an hour later after boiling, add the whole peeled vegetables: carrots, onions, roots of parsley or celery, as well as allspice and Bay leaf. Slightly spicy will make the taste of the broth is ginger root.

Salt the broth about half an hour before end of cooking. Total prep time – about two hours. Cook the broth quickly fail. Its taste depends on the duration and intensity of cooking. From the finished soup extract supplements (herbs, spices) and served with the sliced portion of meat.