How to lighten chicken broth

Pure chicken broth , not only raises the appetite and nourishes, but also gives aesthetic pleasure. To please their loved ones delicious, fragrant and beautiful soup, you need to adopt some simple culinary tips. 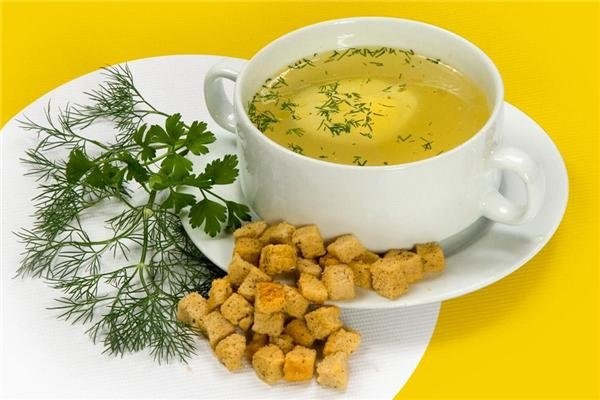 Related articles:
You will need
Instruction
1
Welded chicken broth turned cloudy and dark? Put in a pan the onion in the husk, add pepper and Bay leaf. Reduce heat and boil for 10 minutes, then strain the broth through a fine sieve. The broth will acquire a beautiful Golden hue.
2
Ready, strain the chicken broth and a little cool. Wash 2 eggs, separate the whites and beat them. Enter squirrel broth with the shell and place the pot on maximum heat, bring to a boil, remove thick foam and remove the soup from heat. Let the liquid stand for 10 minutes and repeat the procedure 2 more times. After the first boiling chicken broth can be quite muddy, it doesn't have to scare you. Remove the whites and shells with the help of gauze, folded several times.
3
Peel the carrots, cut them lengthwise into 4 pieces and dry them on a hot pan on all sides. Place the vegetables in boiling to simmer the broth and cook until until the liquid is bright. The finished dish strain.
4
Lighten up chicken broth and fried onion and carrot. Fry together with vegetables minced meat and add the broth. This you will save dish and cook delicious soup.
5
Put in boiling broth gauze bag with cooked rice, a few minutes boil and strain. Rice can be used as a side dish, but on the basis of transparent brothand cook soup with homemade noodles.
6
If there is no time to save a spoiled dish the above methods, at the end of cooking pour into the pan 3-4 tablespoons ice water. The broth will be lighter in seconds.
7
In order not to puzzle over how to brighten chicken soup, initially cook it properly. Chicken, boiled on a slow fire, add to the pan peeled onion, time to remove the foam together with the fat and is always ready prozivaete broth.
Is the advice useful?
See also
Подписывайтесь на наш канал