How to make a cloudy broth clear

Turbid broth could be anything delicious, but it is unlikely that his views will seem appetizing. To make it transparent, is usually carried out clarification. This process is also called the delay, as introduced in broth quickdraw takes on the solid particles that make it cloudy. 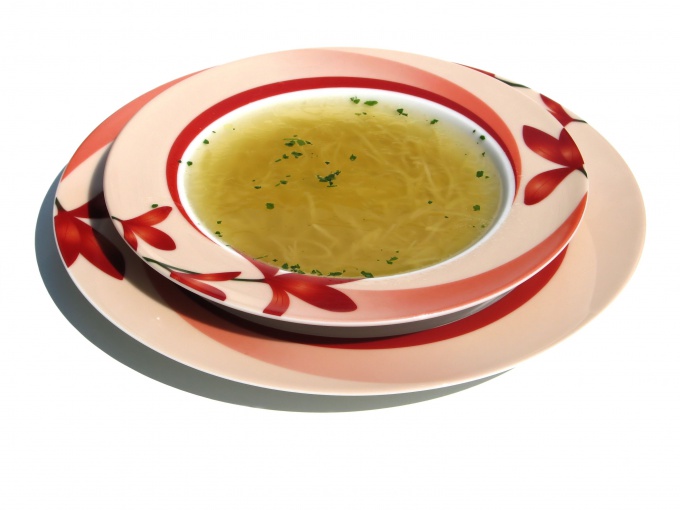 Related articles:
You will need
Instruction
1
Pass the meat through a meat grinder several times, put in separate pan. The smaller will be the resulting meat, the better and faster will be pulling.
2
Lightly whisk egg white and add it to ground meat.
3
Pour in the pan a glass of chilled brothand salt and mix everything carefully.
4
Allow the resulting mixture to stand some time (about 20-30 minutes) in a cool place.
5
Heat, not boiling, turbid broththat you want to make transparent.
6
Quickdraw pour into the pan with the brothohms. Wait until it comes to a boil, remove the spoon from the surface of the foam and fat.
7
Next, simmer the broth on low heat, covered for half hour to an hour until the guy does not curdle and settle to the bottom.
8
Remove the pan from the brothohms from heat, let stand. Then strain it through cheesecloth or a fine sieve.
Note
After clarification, the broth should be fragrant and translucent, with large drops of fat on the surface. Odor or small droplets of fat indicate that meat broth was chosen stale. To use it in food can be dangerous to your health.
Useful advice
For guys it is best to choose the meat of the third grade (Shin, desperately beef; veal and even to the cervical part of the carcass). Such meat contains a lot of blood, which, like egg white, rolled well, so it's best suited for clarifying turbid broth. Remaining after straining the broth quickdraw can be used for cooking dishes that use the meat (for example, pancakes, casserole).
To give the broth more flavor and aroma, sauté in vegetable oil onion, carrot, parsley root and other roots. Add browned vegetables to the pot with the broth along with a sling. As a result, the broth will be not only transparent and tasty, but will acquire a beautiful Golden hue.
Is the advice useful?
See also
Подписывайтесь на наш канал