Whether to merge the first broth when cooking meat

Meat and chicken broths have always been considered dishes useful and even medicinal – they were advised to give people who recover after serious illness, and children to strengthen forces. But lately more and more often hear about the dangers of broths and how to reduce this harm. One way is to use food again cooked on the same meat broth. 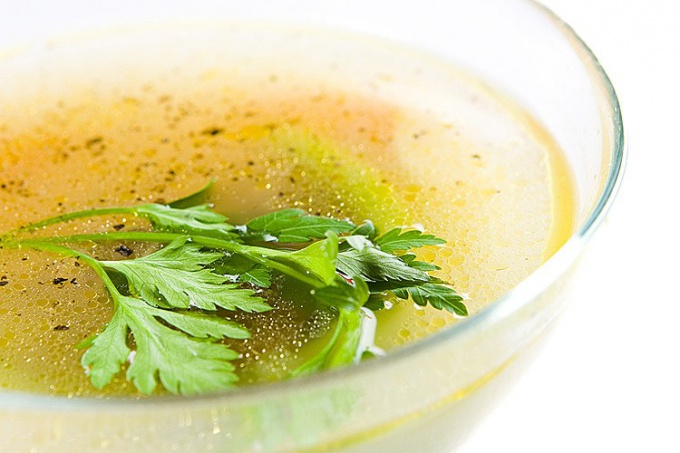 The broth from the meat or poultry turns out during the long cooking time, when extractive substances and proteins, laminating, moving into a liquid in which cooked these products. The breakdown of proteins, their hydrolysis leads to the fact that the broth contains ready-made amino acids that the body requires to digest. The broth, meat, and more nourishing, which uses finely chopped and roasted bone contains a lot of extractives. They stimulate the stomach and secretion of gastric juice, increase appetite and have a toning effect on the body.

While meat boiled in a broth and gave it its taste and aroma is meal diet, which really can not be said about the broth. Doubt nutritionists is more a matter of the meat that is used to make soups. It is no secret that livestock enterprises and farms to stimulate weight gain of animals and birds use different artificial additives that certainly can not be called useful, even for an adult, not to mention the children. Studies have shown that after 25 minutes after the meat is dipped in boiling water, decomposition products of these additives and all the other chemical substances present in the broth may even be a bad "chemical" smell.

Meat rich broth, cooked in the traditional way, is not recommended for elderly people and young children, and those who adhere to the diet.

How to make the second broth

It turns out that the broth, its quality and benefits, directly dependent on the quality of the raw material from which it is made. In the case when you are not sure that the meat has no artificial additives, it makes sense when cooked, drain the first broth after some time. So the chicken will fall apart faster, so cook it first enough broth 30-35 minutes, but the beef should cook a little longer – an hour and a half.

Children up to 2 years, the second broths can be cooked only from poultry and veal.

After this time, drain the broth completely, rinse the meat in cold water and again pour water in the pan. When it boils, put the meat, wait until the boiling starts again, then reduce the heat to minimum, remove the foam, if it will occur, but most likely it will not be salt water. Cook the second broth for a little less time than the traditional way. This broth is already possible to give children and recovering.
Is the advice useful?
See also
Подписывайтесь на наш канал