How to lighten the broth for aspic

Jelly - delicious and nutritious dish. Special charm give him condiments - horseradish, mustard, turnips. But the murky broth of beauty to the Brawn does not add. It can be clarified, to make icy-transparent. In cooking this is called pulling. 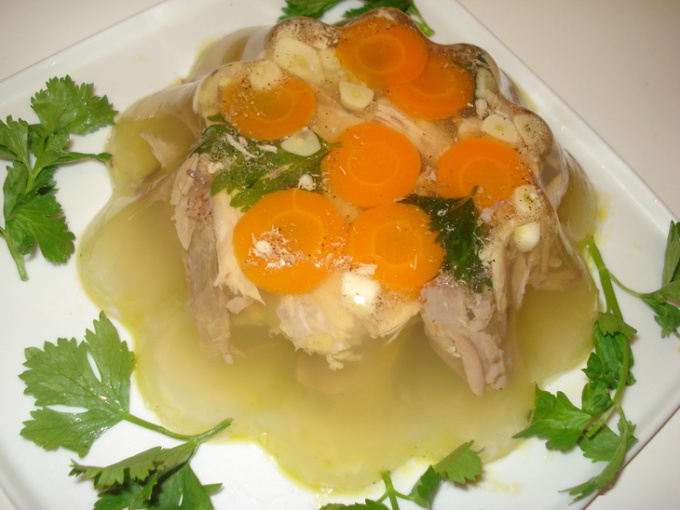 Related articles:
You will need
Instruction
1
Prepare meat broth. Before pulling it is better to strain through cheesecloth, folded several times. This is done in order to remove the skin, small bones and large spots of fat. The first way cleaning is completed. The further procedure for aesthetes-gourmets.
2
Separate the white from the yolk. To lighten the brothand take only raw protein. This product has the ability to bind suspended in the liquid. The result will be transparent like water broth.
3
Prepare the absorbent. In a separate bowl, whisk protein until smooth and thick. If the liquid is more than two litres, take two protein soup will be purer.
4
Complicate the recipe of the absorbent to obtain the best bleaching effect. Add to the whites a tablespoon of crushed ice and also whisk until a thick foam. The second option is complicated by the absorbent: the absorbent of knead 100 grams of minced meat (twisted through a meat grinder at least three times), protein and three tablespoons of broth. Allow to stand for 30 minutes in the fridge and use according to the standard recipe. Stuffing the absorbent further saturate the broth with nutrients.
5
Prepare the broth. It should not boil. Ideally, the broth was very hot.
6
Pour absorbent into a pot of hot brothOhm thin stream, stirring constantly. So that the absorbent dispersed on the pan.
7
Put the broth on a slow fire and cook until boiling. All this time, it is necessary to stir. Five minutes after boiling, the fire will extinguish.
8
Let the brothto cool. During this time, a coiled absorbent sink to the bottom of the pan. Strain.
Note
Remove the foam from the broth during cooking.
Useful advice
Simmer the meat on low heat so that the broth is not boiling in a saucepan. The bigger the boil, the more turbid a broth will turn out. Cooking on a slow fire, it will retain a maximum of useful properties.
Is the advice useful?
See also
Присоединяйтесь к нам
New advices