How to be a cat, if the house is a newborn baby

Waiting for a baby, most moms want to prepare a house to a new family member. This applies both to the environment and Pets. The question arises: what to do with a cat. 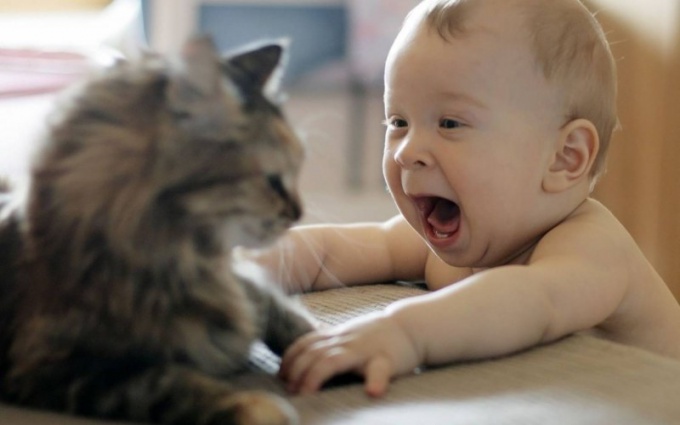 Cat and allergies in the newborn

Many mothers fear that the baby will be allergic to a cat. In fact it is a very controversial issue. No advance will be able to identify with certainty, will impact badly on the health of the baby house this pet.

Some doctors believe that the risk of allergies is even less in those children whose house has always been animals. Attribute this to the fact that the immunity of the newborn initially struggling with the external agent (the germs from cat fur, for example), for which it was intended. It is this kind of training the immune system. If a child gets in too clean environment, his body starts to look for "outsiders" within himself, that, in fact, is allergies.

Therefore, to get rid of the cats because of these fears before the birth of a child is not worth it. Better to see how the baby's body will react to the presence of the animal. If you later suspect that after all the baby is allergic to the cat, it will be possible to take the test to allergens and find out for sure.

To prepare the cat to the birth of a child

To prepare the animal in a particular way to the appearance of the kid in the house still have. This is especially true for those cats who walk on the street. Before the birth of the baby better stop to let her on such walks. Also the cat should be well washed from dirt and treating against fleas and skin parasites, if any.

Twice a year (spring and autumn) the cat necessarily has to be treated from worms. If a baby expected in the family winter or summer, even in these seasons it is necessary to give the cat anthelmintic drug for prevention.

The ratio of cats to the newborn

Some expectant mothers worry that the cat will hurt a small child. But most often such fears are absolutely not confirmed with the appearance of the baby. Even those furry Pets that are not particularly fond of children before, at the birth of a baby, show him care and affection. A fall in the crib to the baby, and when he would cry, run and call a young mother. They sometimes even begin themselves to protect the child, if the little one is hurting.

Cats are more comfortable to the newborn in the house. But rarely are aggressive. They clearly distinguish children just came to visit, and those who were born and grow up in their eyes. First they can scratch or be afraid. From the second they usually do not do that.

Scratching cats usually begin no longer a newborn baby, and grown-up. Then it's more protected from it than the attack.

When the cat is better to give

The appearance of Allergy in the newborn the cat – not the fact. But if the cat is very old, constantly something hurts, then it is better still to give to someone who will be able to take care of her properly. In addition, often have very old cats, there are problems with the teeth, which from the mouth of a cat can bleed or pus. Of such allocation on the floor is bad for the health of the young child.

Thus, if the cat is young and healthy, the birth of a baby it just needs to be prepared. There is no urgent need to get rid of it. After some time it will become clear as the baby's body tolerates the presence of a pet and how the cat behaves with him. But in the case of sick or very old cats, you can think about finding someone who will be able to take care of her.
Is the advice useful?
See also
Подписывайтесь на наш канал