Scraping is a method of taking material for the identification of the microflora and the pathological process. Is taken by lightly pokalyvanie the surface of the body. Carried out: skin scraping, the scraping of the respiratory tract (throat, nose, ear), perianal scrapings, scrapings from the cervical canal, the scrapings from the urethra and other organs. 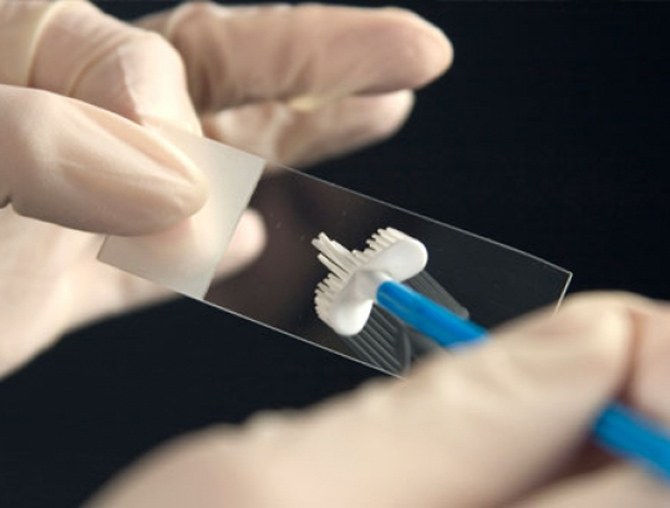 Scraping is a method of taking material for the determination of the microflora or pathological process. Scraping is taken: from the surface of the skin and skin appendages, cervical, urethral, ENT organs (ear, throat, nose), mucous membrane of the uterine cavity, eye conjunctiva and mucous membrane of other organs.

The technique of taking the scraping

When scraping the material for investigation is taken by lightly pokalyvanie defined tools (spatula, probe, cotton swab, spoon Volkmann) surface (skin, mucosa) of the organ under investigation. The fence material when scraping is painless for the patient.


Scraping the skin with a produce the affected area with a scalpel soskablivanija flakes of epidermis on the glass slide.


When the scraping of the ENT organs (ear, throat) material is taken by lightly pokalyvanie mucosa with a cotton swab.


Perianal scraping (scraping on enterobiasis, scraping on helminth eggs) involves the taking of material for examination by wiping a cotton swab to clean the circumference of the anus. Rectal scraping the mucus of the rectum scraped off the probe with a cotton swab.


When scrapings from the urethra in men, the fence material is carried out using the universal probe, which is introduced 3-4 cm into the urethra and a slight pokalyvanie get detachable.

Examination of scrapings of the skin and skin appendages (eyelashes, hair, nails) is carried out if you suspect a fungal infection (mycosis). Analysis of particles with the affected area of skin is performed under a microscope, which is determined by the presence of mycelium or spores of fungi. To determine the type of fungus planted scraping on cultural media.


Examination of scrapings from the throat and nose is performed to determine the inflammatory process, viral infections, fungal infection.


The scraping of the cervical canal is taken to determine viral and other infectious diseases, sexually transmitted diseases, as well as to identify atypical cells in cases of suspected tumor.


The scrapings from the urethra is taken to determine inflammation and viral infections, sexually transmitted.
Is the advice useful?
See also
Подписывайтесь на наш канал