Hot and flavorful chicken broth nourishes, gives a good mood, at the time of disease immediately puts on his feet. In cold and wet weather there is nothing better than a bowl of chicken broth, but overall it is suitable for any time of year. Chicken broth is delicious by itself (neat), and it can be used as the basis for other soups. 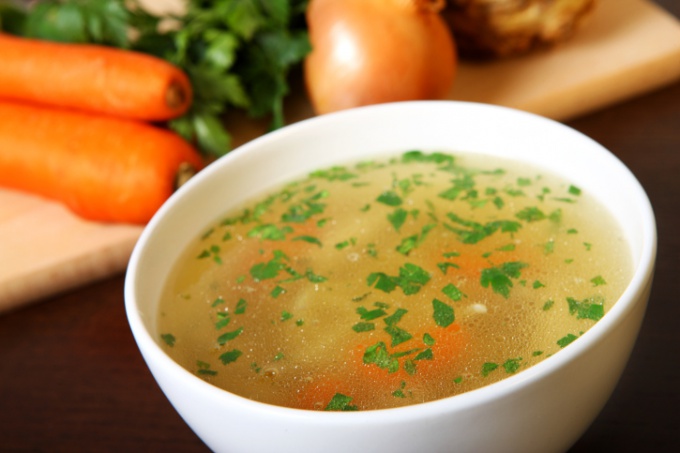 How to cook chicken broth

For chicken broth it is advisable to choose a soup chicken and not broiler - in this case, the broth will be very rich and flavorful, and the chicken will not fall apart in the cooking process, even if it takes a few hours.

For the soup, it is desirable to use a whole carcass, especially that chicken soup breast hard and not always suitable for cooking other dishes. To make the broth transparent and beautiful, it is impossible to prevent strong boiling and the foam must be removed immediately after the appearance.

The broth should be boiled for 60-90 minutes on a slow fire without a lid to a gentle boil, guaranteeing the transparency of the broth. You can then add the carrot, onion, celery. Beautiful shade it is possible to give broth, adding onion peels in a small amount. After 2.5 hours the meat will begin to separate from the bones, at this stage you can add a little salt and leave the broth for another 30 minutes.

Chicken broth: what to serve

Very tasty chicken broth with noodles – homemade or factory production. Noodles it is advisable to boil in a separate pan, and then put it on plates, and pour the broth.

Often the noodles with chicken broth add half boiled eggs, and beauty sprinkle the dish with finely chopped herbs to taste.

Exotic version of chicken noodle broth obtained in the case, if you add rice noodles, Udon noodles or buckwheat soba. Sometimes chicken broth is added with dried seaweed, which, after softening give the dish an Asian touch.