The people of ancient India tamed wild bankivskih chickens around 4,500 years ago. Now this is the most common and numerous poultry. In industry chickens used for the production of nutritious meat, eggs, down and other valuable products. 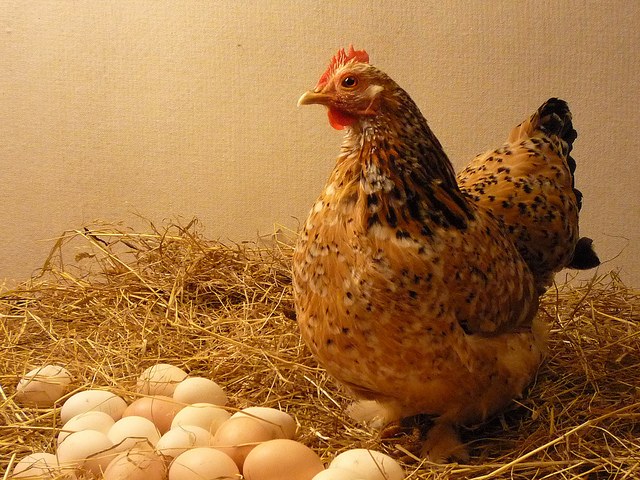 What are the breeds of chickens in the poultry industry

Domestic birds – chickens, ducks, turkeys, geese and others – are divided into breeds. They differ from other qualities used by man for their needs.

The breed is removed artificially by selection. So, alanskie breeds of chickens (Russian white, Leghorn) bred to produce large number of eggs. The meat from some (those chickens have a lot of 1.6 to 2.4 kg), but each hen is capable of carrying at 200-270 eggs per year.

Oviparous chickens-meat breeds (may day, Zagorskaya) give enough meat, and eggs. Meat breed are few eggs, but have a large mass, for example, plymouthrock can reach up to 4 lbs. chicken meat breeds are used for growing fleshy chickens with the age of two months a lot more than 1.6 kg.

When cocks and hens comes puberty and how it is expressed

Sexual maturity of males comes in the third month of life, and chickens – on the fourth. Gonads in the resting state is many times smaller than the active reproductive period of birds. The weight of the testes in the cock during the onset of puberty increases by 20%. The ovaries of the chicken becomes greater and begins to resemble the outline of ripe grapes, on which are strung "berries" - thin-walled vesicles with the eggs.

What happens when the maturation of the egg of the chicken

When the egg Matures, the shell of the bubble bursts and the Mature egg falls out of it and into the oviduct. Here fertilization occurs. Regardless of whether the egg is fertilized or not, some time it is still inside the bird Matures, covered with shells, and 23-26 hours comes out. Lead the way of reproductive organs, as well as urinary tract and bowel, chickens opens into the cloaca. Eggs usually come out of the oviduct blunt end forward.