Why the need for hydrogen peroxide

Hydrogen peroxide - a universal antiseptic that can handle a variety of wounds, inflamed surfaces of the mucous membranes and skin. It is also used for cosmetic purposes - to cleanse and whiten the face, discoloration of the hair. 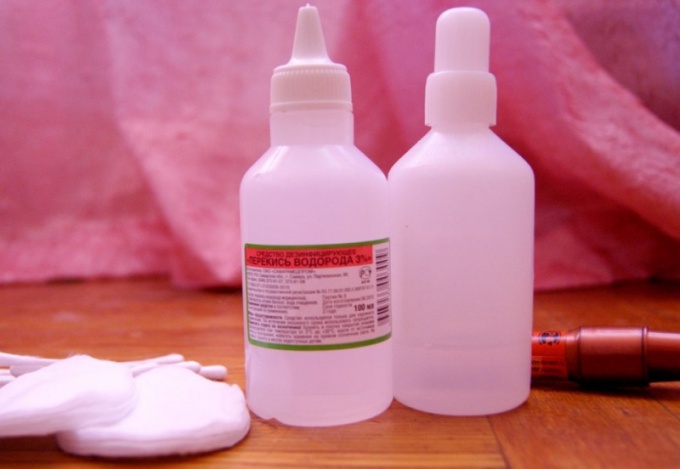 Related articles:
Instruction
1
Hydrogen peroxide – commonly used name of medication of Hydrogen Peroxide (Hydrogenii peroxydum, H2O2). This substance is a frequent guest on the home kit. Typically, public peroxide sold in small containers, is 3%. The percentages represent the concentration of a substance. It depends on them the action of the peroxide on the body. For example, a hydrogen peroxide concentration of 0.2-0.3% is needed to suppress bacteria, that is, it acts on the body bacteriostatic. The hydrogen peroxide concentration up to 3% is a bactericidal agent which causes destruction of hostile microorganisms. Also this tool can be used as a deodorizing preparation. Peroxide concentrations greater than 30% is used for lightening (depigmentation) of the skin, mucous membranes.
2
The official solution of hydrogen peroxide (3%) is a transparent liquid, sometimes with a weak specific smell. Basically, the tool is designated as an antiseptic. It is used to disinfect wounds, abrasions, cuts. During the interaction of peroxide with the damaged skin there is a chemical reaction, which produces active oxygen. Purification of the injured place are mechanically.
3
Sometimes the hydrogen peroxide needed for the treatment of gynecological diseases, stop capillary and nose bleeding. Angina, stomatitis and other diseases of the oral cavity and throat rinse is often prescribed by using. However, in this case, a peroxide concentration of 0.25%.
4
Concentrated hydrogen peroxide (31%) is more often used in the medical, cosmetic and household purposes. Undiluted frequent use of this solution can cause severe irritation or burns of the skin. However, it is often used in the composition of lotions and creams to whiten the skin. Some girls and women use concentrated hydrogen peroxide for lightening body hair.
5
Hydrogen peroxide is a strong concentration is also used for bleaching things in the wash and cleaning. Typically, the solution is mixed with cleaning products. Processing site obtained by the tool provides an excellent disinfecting effect.
6
Hydrogen peroxide in liquid form is most familiar to consumers remedy. However, it should be stored properly: protect from light, heat, do not leave near flammable objects. More loyal requirements differ pills peroxide – hydrogen peroxide coupled with urea.
7
Gidroperit is considered to be more effective. To obtain the 3% solution required, dissolve 1 tablet in a spoonful of water. If you need to create the means for rinsing, the amount of liquid should be increased to one Cup. In the second case, the water should be warm. Thus, tablets of hydrogen peroxide is more universal in application.
8
Some time ago in alternative medicine appeared a new trend: the treatment with hydrogen peroxide. In this program it is proposed to use a means that is dissolved in water, inside. However, this treatment was not confirmed by traditional medicine and can cause dangerous diseases.
Is the advice useful?
See also
Присоединяйтесь к нам
New advices