How to tenderize potatoes

Boiled potatoes – one of the delicious and hearty side dishes. This is a great addition to grilled chicken, pork, mushrooms, fish. It is prepared simply and quickly. However, that potatoes are not mashed potatoes during cooking, it is necessary to consider some nuances. 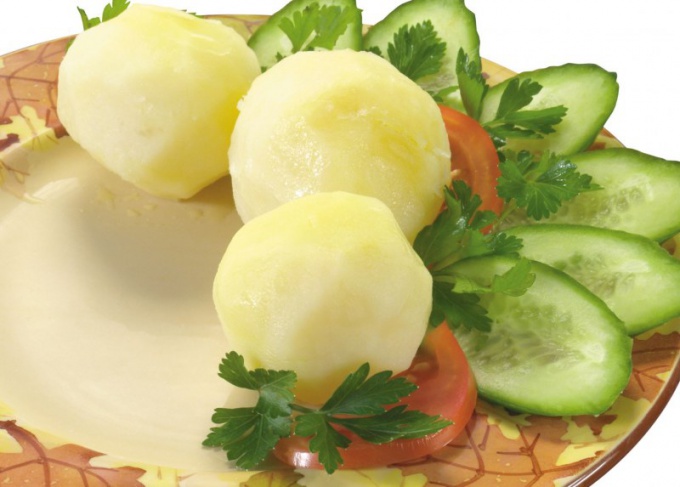 Related articles:
You will need
Instruction
1
For boiled potatoes choose pink or yellow varieties. To tenderize tougher than vegetables white tubers.
2
Take the tubers of the same size. Or cut large potatoes into several sections, so that the vegetables cook evenly.
3
Salt potatoes better at the beginning of cooking. Salt will not let the vegetables be soft after boiling. Also before you drop the potatoes in water, pierce them with a knife.
4
Potatoes are difficult to tenderize in a weakly acidic medium. So in a pot of boiling water add a little vinegar, a few slices of pickle or lemon wedge. Don't worry, no sour taste dish will not acquire. In the preparation of soup, the potatoes should be dipped in broth with vegetables containing acid, for example, cabbage or tomatoes.
5
Cook the potatoes over moderate heat. If the flame is strong, the outside will quickly fall apart, and inside will remain raw.
6
To the potatoes are not seethe, there is such a trick. Wait until the pan with the vegetables to boil. Pour a little hot water and add cold instead. Or another way – let simmer potatoes for 15 minutes. Then drain 2/3 of the water and covariate dish with the lid closed for a couple.
7
The basic amount of vitamins and minerals in potatoes is under the skin. And not to throw in the trash nutrients, tubers is recommended to cook in uniform. Before cooking they must be well rinsed under running water and pierce in several places with a needle. It will not give you the potatoes be soft after boiling.
8
The peeled potatoes suggest in a pot with boiling water, not cold. So the vegetables retain more vitamins and minerals. Also in the pot with the potatoes, you can omit a few cloves of garlic, a few peas black pepper, Bay leaf or parsley. It will significantly improve the taste of the dish.
9
Insanely delicious boiled potatoes obtained by the following recipe. Young tubers are medium in size, clean and rinse. In an enamel saucepan, pour water, boil and add salt. Put the vegetables and cook over heat slightly less than the average for 10 minutes.
10
Then drain the water, but instead pour the potatoes milk at room temperature. Reduce heat to low and continue to cook until tender. That the milk is not burnt to the bottom of the pan from time to time it needs to be shaken. A feast put on plate, add butter and sprinkle with herbs. Serve as separate dish or as a side dish.
Is the advice useful?
See also
Присоединяйтесь к нам
New advices