How to boil potatoes in their skins

Potatoes, boiled in their skins, is significantly different in its qualities from that which is prepared in a purified form. Its distinctive flavor and a more dense structure suitable for adding to salads and for self-consumption. 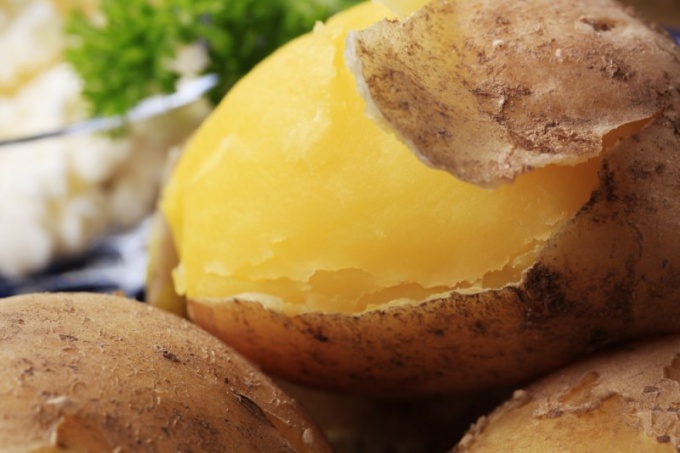 Related articles:
You will need
Instruction
1
Select potatoes for boiling in their skins. Tubers should be clean and smooth, without damage of moves of a wireworm, rot. Pick boil the potatoes in size, they should be about the same, to match the cooking time of each. It is preferable to boiled in their skins potatoes. It is delicious by itself due to the special aroma and fresh taste.
2
Rinse the potatoes in running water. Very carefully wipe it off the dirt peel the new potatoes. Usually, after boiling it is eaten without removing the uniform. If the tubers are heavily soiled, let them soak for a while in the water. Adhering to the ground will get soggy and are easily washed away.
3
Fold the washed potatoes in the pan. Keep in mind, if you boil potatoes in their skins, it may slightly stain the enamel of the pan. Take to cook potatoes in the skin, metal or not too new capacity.
4
Pour into a saucepan with the potato water. The liquid should barely cover the top layer of tubers. Put the saucepan on a high heat. Cover with a lid. When the water boils, reduce fire to small, cover open, so that the water is not poured.
5
Boil the potatoes, depending on its size for 20-30 minutes. 10 minutes before end of cooking salt and boiling water.
6
Boil the potatoes in their skins for a couple. To do this, put the prepared potatoes in a electric steamer, fill it with water and set the time according to instructions. Or place potatoes in a saucepan equipped with a special stand. Pour water on this stand, put on the fire. The cooking time will be about the same as when cooked in water.
7
Determine the readiness of the potatoes with a fork. If the largest tuber is pierced easily, so all the potatoes cook. Drain and serve the potatoes on the table. Young potatoes immediately and spread with butter, vegetable or cream, sprinkle with chopped dill, parsley, Basil, cilantro, green onions, pushed through the press a clove of garlic.
Note
Potatoes should choose the same size, thoroughly wash and put in the cauldron Bay from the top with cold water. Season with salt (about 0.5 - 1 tsp salt to a capacity of 2-3 litres). This will prevent from cracking. Over high heat bring to a boil, then reduce heat and cook until tender.
Useful advice
Put on fire, bring to the boil and simmer for 15-20 minutes. The willingness of potatoes check with a fork or knife. Boiled potatoes to cool. Clean. If You are using the potatoes to the salad, then cut according to the recipe of the salad.
Is the advice useful?
See also
Подписывайтесь на наш канал