How to boil potatoes for salad

Potato is one vegetable that is not consumed in salads raw. Always just boiled. Or, at least, is baked. Owing to his taste, and the presence in the product of harmful solanine, which is partly disintegrate and loses its poisonous properties, namely the heat treatment. But to boil potatoes for salad in several ways. 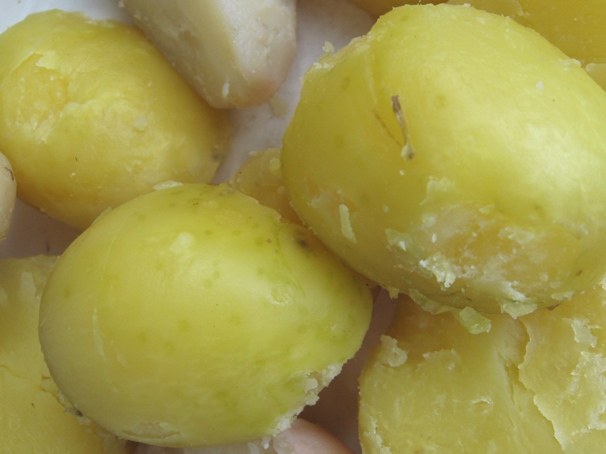 Related articles:
You will need
Instruction
1
If you prefer the potatoes "in uniform", pick up desired amount of potatoes of approximately equal size. It is advisable to choose the root of the average value. In this case they cook quickly and almost simultaneously. Thoroughly wash all the potatoes, if necessary, RUB the peel with a stiff sponge or soft brush.
2
Put the potatoes in a small volume (the liquid should only 3 /4 to cover the upper tubers) of boiling water. Cover the pan with a lid. Water, salt, 10 minutes after the start of cooking. Cook the potatoes on low heat for 15-20 minutes, until tender. It is easy to check with a fork or sharp knife: when the root vegetables are easily pierced, they were cooked.
3
The tubers cool and peel. Taste the potatoes "in uniform" differs from the one cooked without the peel. It has a more dense and not decaying structure. It is easy to cut into neat cubes. And therefore, it is necessary for salads in which the ingredients need to save the form.
4
If the quality of potatoes is low, cook it cleaned. Wash the required number of tubers and remove the peel with a knife for cleaning of vegetables. Cut large, equal pieces – halves, quarters. The smaller the slices, the faster cooked potatoes. Dip slices in boiling water. Water pour not too much – the top layer is cooked for a couple. Cook under a lid. Cooking time varies from 10 to 15 minutes, depending on potato varieties. Water add salt before the end of cooking, in three minutes. Readiness determine empirically. Immediately drain almost all the water. Leave just enough to the potatoes not welded to the bottom. Let cool and prepare the salad.
5
If you have a steamer, boil peeled potatoes in it. In this case, the roots will remain the density and taste resembling a potato "in uniform". In steam the potatoes cook a little longer – about 20 minutes. Readiness check in the same way – pierced with a fork.
Note
Starting from February last year to cook the potatoes "in uniform" is not recommended. At this time, in the potato peel is the most intense form harmful solanine.
Useful advice
Cooking time for young and old potatoes, and different varieties of this vegetable may differ significantly.
Is the advice useful?
See also
Подписывайтесь на наш канал