How to make a dead man out of the house

Since ancient times, developed in Russia for the funeral rites. Despite the past century, many traditions associated with death, period of stay of the deceased in the house and funeral, has been preserved to our days almost unchanged. 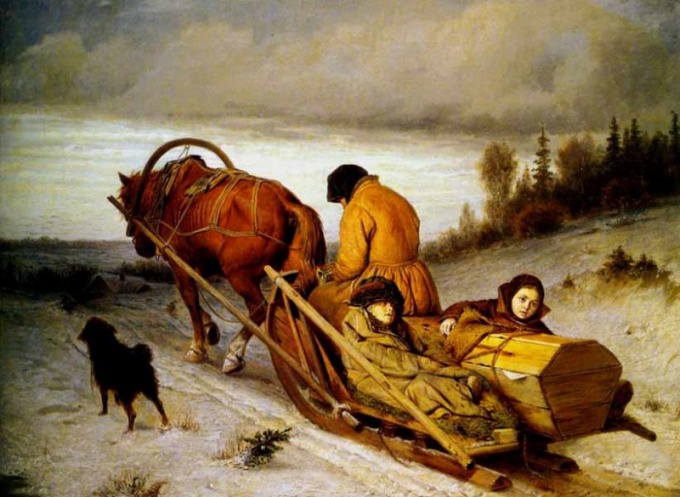 Related articles:
Instruction
1
The moment when the human soul was parted from the body, according to the beliefs of the Russian people, demanded strict observance of special rites. Otherwise, the soul could not find peace and was doomed to eternal wandering. The mandatory elements of the funeral rite was the farewell of a dying family, confession, lighting candles. The worst punishment for a man was considered a death without candles and without repentance. In this case, the deceased could turn into a vampire.
2
When the deceased was collected in the last way, costumes sewed forward with a needle, i.e. so that the tip of the needle was looking in the opposite direction from the sewing. Washed and dressed the deceased was laid on the bench facing the door. Thus the man had to lie to the right of the door along the floor boards and a woman on the left and across the boards.
3
Time of stay of the deceased in the house, as well as the period until the fortieth day after the funeral, i.e. before the final transmigration of the soul of the deceased to the other world, was considered very dangerous. At this time, seemed to open the door to the underworld, and the dead could spy out and steal a loved one. So he couldn't do it, his eyes closed pennies. In addition, a dead man was tied up, so he doesn't come out of the grave and went in search of a home. There is still the custom to hang a black cloth mirrors in the house where lies a dead man. This is done so that the deceased could not be seen in the mirror and not to take, and to live not saw the reflection of a coffin and was not afraid of him.
4
In the coffin the body was laid just before the removal of the house. In ancient times it was considered the last dwelling of the deceased and were made from a single tree trunk with a small window. Later, the coffin began to put together using wooden nails. Under the head of the deceased laid a pillow stuffed with wood shavings, remaining after manufacture of the coffin.
5
The deceased was carried out through the back door or even through the window, so he couldn't find our way back and return to the house. The dead man was carried feet first, so he did not see the road back. The coffin is in any case not had to bring relatives to the family is not a new problem happened. If the dead man was carried out still through the front door, it was three times struck the coffin of the threshold to the dead I said goodbye to the family home and never returned to him. After the funeral procession was a woman who chalk floor bath with a broom, spraying water to wash away traces of the deceased. Floor after the removal of the deceased were washed with spring water.
6
The coffin was carried on the hands or on towels. If the cemetery was far from home, the coffin at any time of the year, carried on the sled. The funeral ceremony was necessary to complete before sunset to avoid interference of evil forces. In the grave of throwing money to a dead man could redeem himself a place in the cemetery, clothing, grain, which is sprinkled on the coffin during the removal of the house. On the grave were arranged the funeral. A violation of the traditions of the funeral rite was threatened by the return of the deceased or death in the house.
Is the advice useful?
See also
Показать еще
Присоединяйтесь к нам
New advices