The fight against the Colorado potato beetle

Every vacationer wants to get rid of the Colorado potato beetle, which eats not only potatoes, but also the young plants of eggplant and tomatoes. To fight this pest is not easy, but it is possible. 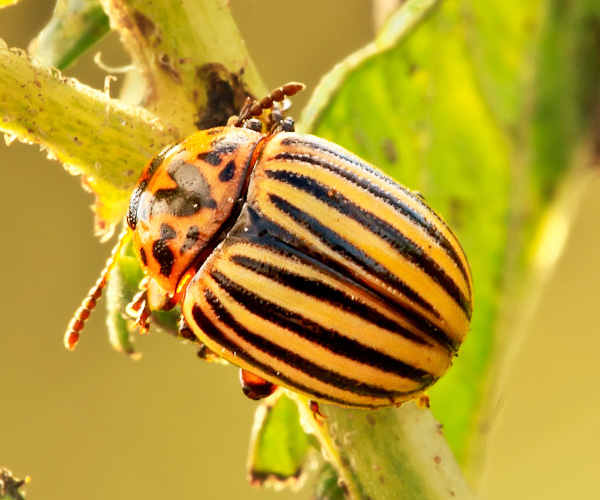 The larvae and adults of the Colorado potato beetle feed on the stems and leaves of potatoes, peppers, tomatoes, eggplant and other plants. The appetite of these pests are serious. As soon as the first shoots of plants, beetles immediately begin to crawl together and one day can destroy all the greens. Therefore, it is important not to give Colorado potato beetles to breed and escape winter in the ground. There are several ways of dealing with this pest, and if you do not help people's money, you can always use insecticides.

The most primitive but also very time-consuming method of struggle is shaking the beetles from the bushes. Surveying each Bush by hand, in addition to removing bugs, to get rid of their eggs, which are usually attached to the bottom of the leaves. Type in a bucket of salt water, take a broom. Go forth and keep each Bush over the bucket, shaking off the pest with a broom. Leaves with eggs simply break off and throw into the bucket. Caught pests destroy in any way. This method will greatly reduce the number of bugs, but it is too much work and time it takes.

You can use lures to significantly reduce the number of Colorado beetles on the plot. Until the first seedlings in the ground kopite cans of small size, place them inside a little bit of chopped potatoes. Caught pests should be destroyed every day.

A great helper in the fight against bugs is wood ash. Sprinkle the potato plants with ash. This is best done in the dew, so that the ash stuck to the sheets. You can instead use the infusion. Make it as follows: 300 g of wormwood mix with boiling water, add a Cup of ash and keep 3 hours. The resulting mixture, strain and then spray them with bushes. Two days later there will be neither adults nor larvae of the Colorado potato beetle. With the second wave of pests can be combated in the same way.

Well helps to destroy the Colorado potato beetle infusion of the shell and the walnut leaves. In the fall need to gather the dry leaves of a walnut, and simmer them until spring in a safe place. Then, a month before the emergence of beetles the leaves soak in water. Will be enough for 2 pounds of leaves 10 liters of water. Infusion before use, double-filtered.

The Colorado beetle does not tolerate different smells. So can be planted next to the bushes of potatoes, garlic, nasturtium, calendula. The same repellent effect on pests have and legumes.

The fight against the Colorado potato beetle with insecticides

If the appearance of the Colorado beetles have acquired a mass character, we have to use different kind of pesticides. Processing plant in this case is carried out in calm weather in the evening or in the morning. In the process the use of insecticides not allowed to smoke, eat and drink. After use the drug, it is necessary to change all the clothes and take a shower.

Pesticides sprayed a special spray and in any case don't do it with a broom. The use of a special device for spraying increases the efficiency of the drug in 10 times. There are two types of insecticides used against the Colorado potato beetle: chemical and biological origin. The preparations of biological origin include Colorado, Akarin, Bitoksibatsillin, Fitoverm, Novodor. The others on the market drugs, including Prestige and Akhtar, are chemical. This means that everything must be done exclusively according to the instructions on the packaging and not to eat the tubers before the deadline.