How to get rid of Colorado beetles

Colorado potato beetle is a constant headache not just gardeners-growers, but also farmers, specializing in the cultivation of eggplant, tomato and other crops. Moreover, in recent years beetle-pest had become addicted to a new kind of vegetables – sweet peppers. So how to effectively fight with this scourge, Colorado, using no chemicals that may be hazardous to health and which bugs pretty quickly? 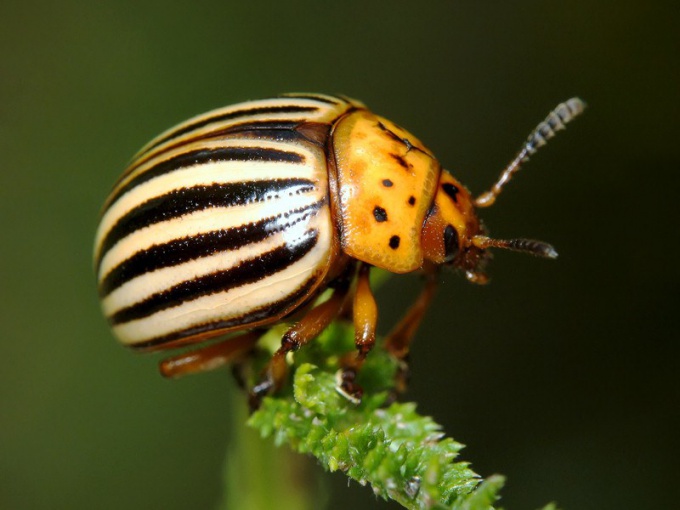 The most popular methods of combating the Colorado potato beetle

To similar type bailout funds farmers consider, for example, chicken manure, and, more specifically, a solution based on it. As follows from the reviews themselves growers, after careful processing field beetle disappears with him for a very long time and pretty quickly. To prepare the solution must be diluted in a bucket of water 10-15 grams of litter. Treatment is recommended after harvest.

The second means – ash, which is effectively the dispersion through a sieve into blooming plants. Unfortunately, the efficiency of this method are lost if the stage of flowering has passed.

Soap-ash solution also proved to be quite effective. Prepare it as follows 1 kilo of ash should be boiled in 10 liters of water, to give the obtained solution to stand for several days, and then dissolving in the solution a piece of pre-grated soap. The tool has to be used diluted in the ratio with water of 1 liter to 10 liters of fluid.

Effective and herbal methods. So, you can plant around potatoes., garlic or beans. They smell great discourages pests.

Another way – a solution of elecampane, which is also produced quite simple. 100 grams of the roots of plants that can be purchased in almost any pharmacy, poured a bucket of boiling water and brewed with the lid closed for about an hour. Then the plants are simply sprayed.

Some gardeners have reported this method. In the fall you must collect the tops already otplodonosivshih tomatoes, chop them and pour 10 liters of water, which is then put on fire and boil for 30-40 minutes. For greater efficiency you can add to this solution a bit of soap.

Suitable for inhabitants of the southern regions and the following method – the leaves or walnut shells are very finely pounded and soaked in water for several days. The liquid is then filtered, and then it is sprinkled potato plants.

Effective for the treatment of potatoes against the Colorado potato beetle showed itself, and urea, and more specifically, its solution is 100 grams of urea per 10 liters of water. Moreover, this method is doubly so. It will help to get rid of pests, and also foliar feed the plant nitrogen system means.

You can also make a product based on vinegar and baking soda. On a standard bucket of water needs to be diluted in half a liter of vinegar and 100 grams of soda, and then ensure that the latest is well dissolved. Great tool for adult beetles and their larvae.
Is the advice useful?
See also
Подписывайтесь на наш канал