How to make a turban

Expected corporate party based on "Ali Baba and the forty thieves , or child wished to go to a matinee in the garden in the Sultan costume? Will have to do a turban – a traditional Oriental hat, which we all imagine in fairy tales and movies is very bright and luxurious. 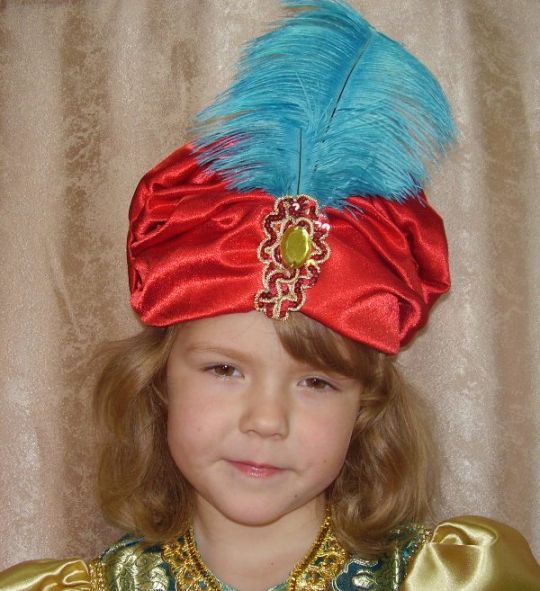 Related articles:
You will need
Instruction
1
For the manufacture of turbans do not need a lot of time and money. The Foundation of the future of the headdress is a large beautiful stole. Try to find maximally long and wide stole, silk will be most appropriate, but if it's not, you can use any.Stand in front of the mirror, fold the stole in half in width. Then throw it on the head so that the ends of the scarf falling freely on the shoulders.
2
Take one end of the tippet and tightly twist it. Received the harness wrap around the head as many times as will allow the length of the harness. Tuck the tip under the layer of fabric so that the harness could not be unwound.The same steps repeat with the second end of the tippet.Make sure that both harness well secured. Pin getting out the fabric with pins to make the turban more reliable.
3
Now you need to decorate your turban, so she was smart like a Sultan. For decoration suitable large pendant with stone, which can sew turban. Great if you have a peacock feather, it can also be used as an element of decor.If you make a turban for a child, take a smaller scarf, stole baby will be hard to wear on your head. Pull the scarf ring with big stone and make a turban according to the description above. The ring in this case will serve as a decoration, so be sure to wrap the ends so that the ring appeared about his forehead.You can easily make a turban, and your costume will be the most original at the party.
Is the advice useful?
See also
Подписывайтесь на наш канал