How to get rid of black spots on roses

Black spotting is one of the most harmful diseases that afflict roses. With him necessarily need to fight. Black spots is not only one of the most widespread diseases of roses that grow in open areas, but also the most dangerous. 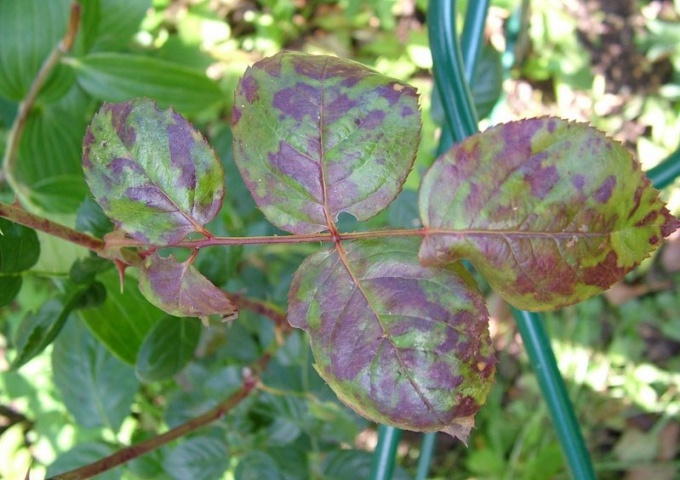 Related articles:
During the second vegetation period there is a loss of leaves, annual shoots sometimes. Black spots on roses is due to weather conditions and varietal characteristics.

How to recognize illness

at the top, on the leaves of plants appear purple, Magenta or white spots;
- over time, black spots, ranging in size from 50 to 150 mm.

Form, size and location of the spots is also dependent on the variety.

The lesions immediately began to develop a fungus. It resembles black pads. The sheets on which they appear, turn yellow and fall off. This leads to the death of the plant.

How to deal with black spot

The source of this disease – affected leaves and shoots that are left from last year.

Therefore, in order to avoid developing diseases of other plants, you need to collect fallen leaves and burn them. If spotting appears on the new shoots, they should be immediately cut off.

Do not be lazy, by covering shrubs for the winter. To black spots on leaves of roses does not appear, make sure to eliminate sources of the fungus:
- collect and burn the spotted leaves of the plants;
- dig the soil around the roses;
- treat plants with a fungicide.

It's best not to forget about constant prevention. You need to spray the bushes with infusions of mullein or horsetail.

You can still take the drugs that increase the resistance of plants to disease. It can be zircon, immunogenic, "El", "Obereg". Very effective alternate treatment is drugs that contain MANCOZEB and triazole.

Spraying can be carried out once a week, and alternate drugs are not more than three times. The effect of such treatment plants is very positive.

There is another way to get rid of spots – like the opponents of various drugs. In the fight with black spot can help a shovel.

If properly put the plant to properly care for it, then the disease is unlikely to impress.

If you want to protect your roses from the spot, then perform the following manipulation:
- place them more freely;
- transplant into the Sunny place;
- remove density;
- timely remove fallen leaves.

If the disease still affected plants in autumn make a severe pruning of the Bush. Cut the shoots at the level of 2/3 of the buds from the base.
All this is guaranteed to reduce the lose of favorite roses with malicious diseases.
Is the advice useful?
Подписывайтесь на наш канал