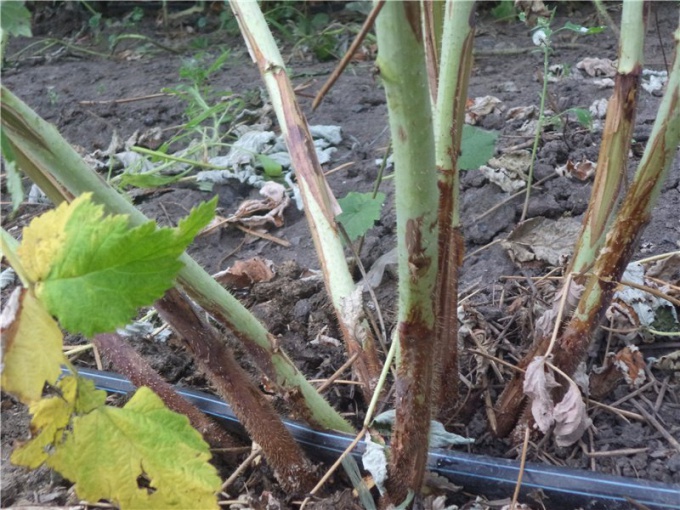 What happened to the raspberries?

Raspberries struck didymella, or purple spots. Is a common fungal disease. It is not only on the stems of raspberry, but also affects petioles, leaves, buds of plants. On shoots and petioles causing spots purple-brown or reddish-brown color. Such spots, "spreading," cover the lower and middle parts of the stems of the raspberry. In the future, the bark begins to crack. When severe fungal outbreak stalks with leaves wither and fall off. And they also appear dark brown spots.

The pathogen overwinters on infected stems and fallen leaves. The infection is transmitted by wind, infecting healthy bushes of raspberries. The development of the fungus contributes to a strong thickening landings. Sick plants especially on heavy soils, where a lot of nitrogen.

When there is a "flash" diseases of raspberries?

The rapid spread of the disease "helps" warm, humid weather. Fungal spores ripen in July-August. Mushroom roams from one plant to another, infecting planting raspberries. And in some years can completely lose a crop if the disease will join the pest - stem Midge.

What if raspberry sick?

While collecting berries only cut diseased stems, fallen leaves and burn them. To use the "chemistry" is not acceptable.

After harvest, it is necessary to make an inspection of all plant raspberries again. Repeat the cutting "waste" stems, if they again appeared, but also cut otplodonosivshih and underdeveloped shoots. Collect the fallen leaves and burn or bury in the compost pile. In this case, there should be treatment of planting with a fungicide, such as Bordeaux mixture. It is necessary to feed the raspberries, making a double dose of potassium at normal application rates of nitrogen and phosphorus.

Prevention and protection from disease.

Twice in the spring, before Bud break and before flowering, the shrubs should be treated with Bordeaux mixture, following the instructions.

The garden area was initially better to plant healthy planting material, as fungal "sore" move them to the garden. Planting beginners, it is necessary to briefly cut the stems almost to the rhizome. The growth buds near the rhizome, it is sufficient for the resumption of growth of the stems.

To plant raspberries have a stock, that plants are well ventilated. If shrubs fall to the ground, they should raise the trellis.