How does the bark beetle

Beetles-beetles is a family of beetles, represented by numerous species. Each representative of this group is distinguished by its size some of the features of the body structure. The main diet of bark beetles – bark. These beetles are among the pests that harm garden plants. 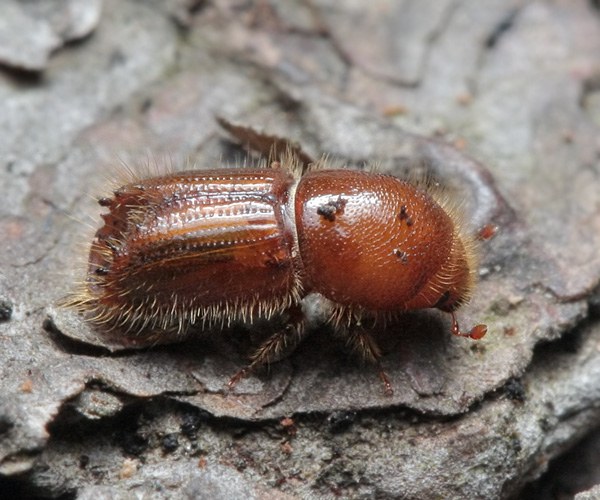 A group of beetles includes several hundred species of beetles. Among them are the microscopic representatives, which in size represents only 1 mm. Beetles that live in the southern territories, can be more 1 see Many species of bark beetles live only in certain areas. For example, tropical beetles never meet in the Central region.

The most common types of beetles-bark beetles are considered to be wrinkled zabolonnikom, beetle typographer, West unpaired bark beetle, lubed and Apple bark. Beetle lubed has a black color, and on the body are short furry hairs. This beetle eats mostly bark of coniferous trees.

There are varieties of bark beetle, which are known to provide their larvae with food, dissipating in the special moves done by the spores of fungi.

Bug-the printer is a small beetle, body length slightly exceeds 5 mm. the Main difference of this beetle is its color. On a black shiny body clearly visible light brown or reddish hairs.

Apple bark and wrinkled zabolonnikom – beetles that look very similar. Their bodies are painted in brown or red-brown color. However, the main difference in this case is diet. Apple bark – a resident of the gardens, which eats the bark of fruit trees, and in the diet of zabolonnikom includes the solid wood. Often bark beetle zabolonnikom can be found in oak groves.

Visually the body of the beetle resembles the may beetle, but with a more pronounced head. It is for the shape of the head it is possible to determine the species and sex of the beetle. The male on his forehead visible depressions and pits, and the female has a convex forehead, with a rather large growths. The size of the females exceed the males.

It is noteworthy that according to the accomplished moves, you can determine the type of bark beetle. Each variety of these beetles leaves behind a different "drawings".

Color color bark beetle may vary depending on the territory of its habitat. Tropical beetles have long legs, a mustache, and predominantly black coloration. Beetles that live in temperate climates – brown, with short whiskers and paws.

The distinctive feature of all bark beetles – the presence on the antennae and distinct pins in the form of a ball. In the early stages of life to distinguish between bark beetles by their appearance is difficult. The fact that these beetles are born are always white. Their color changes over time. To identify the species of the beetle is possible only by the wood on which he lives. Each group of beetles feeds on certain types of bark.
Is the advice useful?
See also
Присоединяйтесь к нам
New advices