What bugs are found in Central Russia

Coleoptera, or beetles, the largest order of insects, numbering more than three hundred thousand species. This is more than a third of all known insects. On the territory of Russia can meet only a small part of them, not more than ten thousand species of beetles. 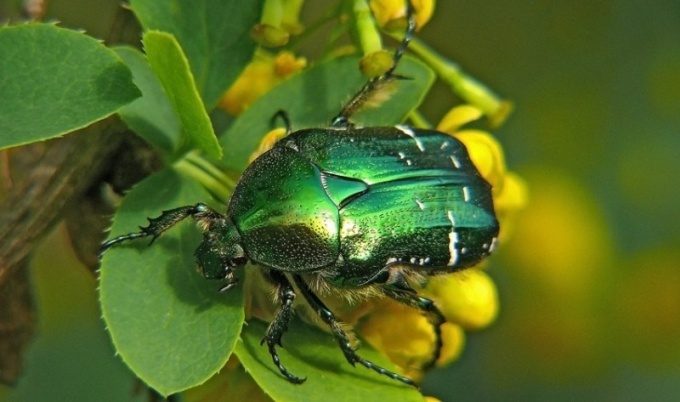 Related articles:
Instruction
1
Some of the most common representatives of Coleoptera in Central Russia – bronzovoi. Their color and species diversity is very large, and they feed mainly on flowers of various plants and fruit trees, while not causing damage to agriculture.

Bronzovoi are found throughout Eurasia, with the exception of mountainous terrain and deserts, are the daily way of life, like Sunny weather and almost never eat on cloudy days. In this weather these beetles behave very passively, hiding under the leaves of the plant roots. Bronzovok virtually no special protection, they are not poisonous and are easy prey for birds such as magpies, jackdaws and rooks.
2
Seven-spotted ladybug found not only in Central Russia but also in other areas in the far East, Central Asia and even in North Africa. This beetle is a real predator, the main food for the seven-spotted lady beetles are other insects. This species was transferred to North America to combat aphids populations.

The seven-spotted Ladybird enemies – parasites, bugs and fungi that attack mostly pupae of this useful insect and feed on them. Seven-spotted ladybug is not to be confused with other subspecies of ladybugs, for example, dvadtsatisemiletny, or potato, which cause damage to agriculture, destroying crops. From the birds, these insects are protected by a special toxic fluid which is harmless to humans.
3
Not the last place in the list of beneficial beetles that live on the territory of Russia are occupied by jugglery. Most of these insects – not just predators, but the real destroyers of harmful insects for agriculture because of jugglery propagated artificially, and today are found almost worldwide, with each year increasing the population and species diversity.

But there are among these insects and pests, for example, bread jorgelina. This beetle feeds on the grains of barley, rye and wheat, and its larva eats the stems and leaves of these crops, cereal crops causing serious damage.
4
Among other Coleoptera pests Colorado potato beetle stands out. Appearing for the first time in America, this insect has spread throughout the world, including in Russia, being first in the West, and by 2000 reaching Primorsky Krai.
5
Of aquatic insects it is worth noting predacious diving beetles, are permanent residents of freshwater bodies, which are found in Russia is almost everywhere. It is quite full of bugs, they can even fly, but they do it very reluctantly, and then only in order to change the reservoir more suitable for them.
Is the advice useful?
See also
Присоединяйтесь к нам
New advices