Do I need to do a cataract operation

Diseases of the organs of vision can lead to blindness or slabovidimym. It is therefore necessary to detect the disease and begin to treat it. Modern equipment and methods of treatment will help to restore sight to one hundred percent. 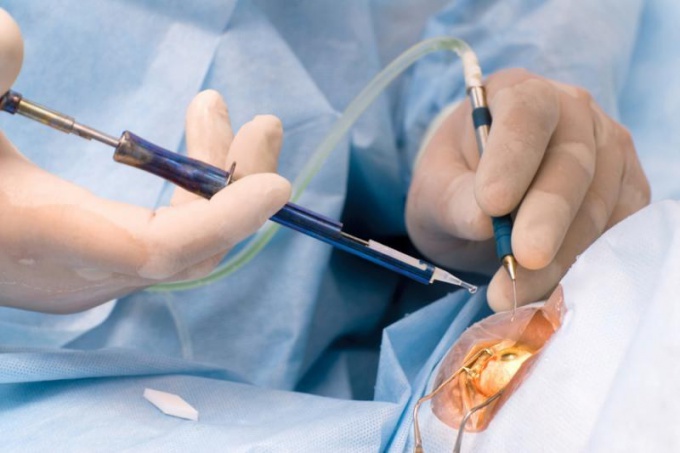 What is a cataract

Cataracts, or clouding of the lens - one of the most common eye diseases among the elderly population. The crystalline lens is a natural lens which transmits rays in the eye or refracts them. Person sees well, because the lens is elastic and can change shape and instantly "clean focus". It happens that over the years, it changes its properties, becomes turbid, and the eye gets only part of the light rays, causing a person begins to see badly, everything seems blurred. In the process of progression of cataract patients will appear floaters, spots before my eyes.

The disease gradually progresses, the area of lens opacity increases. If you don't get treatment, you can go blind.


The causes of the disease

Most common senile cataract, that is, people after the age of 50 years. But apart from that there is a traumatic, congenital and radiation cataracts. The causes of the disease include: genetic predisposition, bad ecology, irradiation with ultraviolet light, radiation, medication, dysfunction of the endocrine system.

The removal of the cataract

There is no universal medicines which can cure the eye from cataracts. Vitamins, drops, tablets only can slow down the process of lens opacity, but sooner or later we'll still have to go to a surgeon. Ophthalmic surgery has leaped forward. There are many methods of treatment of cataract. Ultrasonic phacoemulsification is the most common and popular method worldwide. Surgery is that the lens is replaced by a foldable intraocular lens. There is no age limit for this surgery. The operation is performed in the early stages, preventing cataracts continue to progress. After replacing the lens of the patient is sent home, do not require hospital stay. During rehabilitation the patient should eliminate physical exertion, sudden changes in temperature.

Previously, such operations are also carried out, but there were a lot of restrictions. Not recommended to do surgery in the summer as there was a risk of infection in the eye. After surgery the patient for two weeks was admitted to the hospital.

Patients are advised not to wait until the cataract will be deprived of the view. You should not rely on medications because they do not cure, but only slow down the spread of the disease, and a cataract will not work. No need to be afraid of the operation, it is completely painless, will help to return to his former life with a good vision, with the ability to see a clear outline of the subjects around and not blurry picture.
Is the advice useful?
See also
Подписывайтесь на наш канал