How to make a dancing liquid

Dancing to make liquid, you can use hendgam. This is an unusual substance, a product that applies to children's toys. It is called a non-Newtonian liquid, since the behavior of this material is contradictory to one of Newton's laws. Can also be used instead of a non-Newtonian fluid normal paint. If you remove the dance of liquid on the video and play it in slow mode, the spectacle turns fascinating. 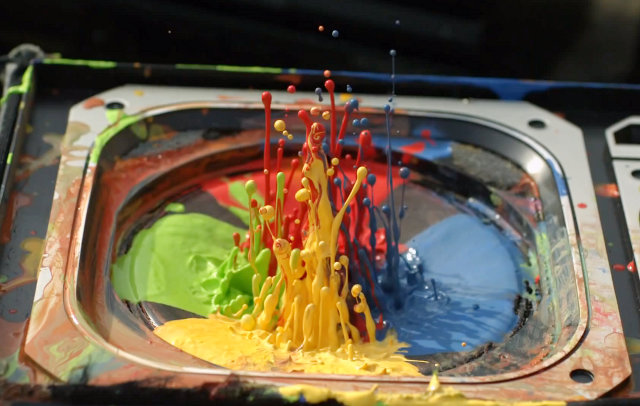 Hendgam "dancing" under the waves at a certain frequency. Fascinating experiment you can conduct right at home.

Although hendgam does not violate the third Newton's law of motion, he acts very unusual. Resistance law of matter States that every action meets a reaction. He really resists impact from the outside, but not as much as other liquids.

Most liquids have a constant and consistent viscosity. If you strike with the hand in the water, she rasplakalsya. But in the case of hendgam it is not so. Leave him to himself, and he'll melt like a puddle. Hit it and it will become hard as a rock. The fact that the substance is made from a special type of polymer which gives it unusual properties.

Hendgam (English handgum) is translated as "chewing gum for the hands". This unusual band can make yourself, and then force her to dance. This will require corn starch.

Pour into a large bowl one Cup of corn starch. Stir the starch with your hand. Add in half a Cup of water 1-2 drops of food coloring. Though add food coloring do not have, thanks to him, the color of endgame will become more vivid. Pour the water starch and stir all until a homogeneous mass. Water is better to add gradually, stirring constantly.

Store the substance in a plastic container.

How to make hendgam to dance

Hendgam "alive" when placed on a speaker and play music at a certain frequency. On the surface of the substance appear bumps, waves, spikes. For the experiment it is better to take the old speaker. It is necessary that in the place where it will lie hendgam, was deepening. Perhaps you have old column, which is not a pity to remove the plastic covering for the speaker. It will be the perfect pool for a dancing liquid.

Record a special tune that was waking up liquid. Hendgam responds to low frequency sounds, 20 - 45 Hertz. Speaker cover with a plastic bag. Connect it to power supply and pour the liquid into a speaker. Turn up the music and watch. You can pull the pack, then the fluid dance even more.

Instead of endgame in speaker you can pour the different coloured paint and including it, to remove dance on camera. You can remove both the top and side. If the camera has the ability to record in slow mode, when playback of a recording you will see how drops of paint rise up, shuffled, forming various three-dimensional figures. Impressive looks, the dance of colors, shot from the side at close focus. Such a sight cannot be seen with the naked eye.

What else can you do with a non-Newtonian fluid

Roll the ball endgame in the hands, and then stop driving. Look how it spreads. Or catch the second hand flowing substance.

Fill a deep dish stuff, and then squash it with your hand. You will be surprised that hendgam not splashing, but it only gets harder.

Hendgam can not be washed off in the sink because the drain can become clogged.