Is considered normal, usual and natural appearance of gray hair in adulthood, after 40 - 50 years. Sometimes first gray hairs can be detected after 25 years. But if gray hair appeared very small child? How should parents react? To beat the alarm? 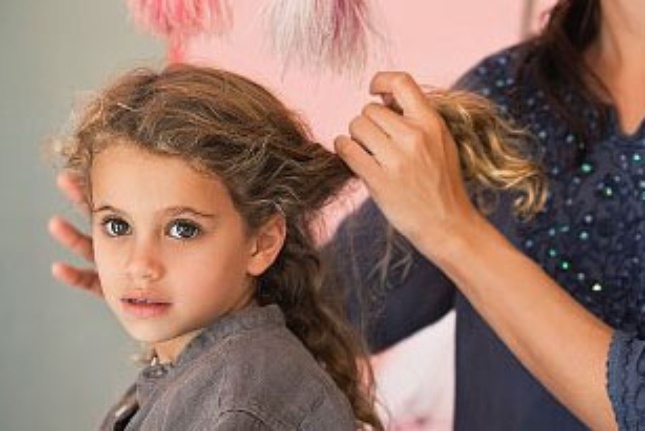 Related articles:
Why have gray hair, difficult to answer unequivocally. Gray hair occurs when the violation of developing special cells melanocytes pigment pigment. In addition, studies have shown that gray hair increased amount of air bubbles. And hair cells produce hydrogen peroxide, which bleaches hair from the inside out. Sometimes it happens that after experiencing extreme stress people turning gray overnight. It is connected with generation of huge amounts of peroxide.
At a young age, the melanocytes are very active, produce a sufficient amount of coloring pigment and peroxide completely decomposes particular enzymes. The older the person becomes, the less pigment is produced and worse working enzyme system that destroys hydrogen peroxide.

We can distinguish several groups of causes, leading to the appearance of gray hair in children.
1. Heredity.
If the parents or other next of kin gray hair appeared before (or even in childhood), wonder early graying of the baby is not worth it. In addition, there are a number of genetic diseases, one symptom of which is gray.
Albinism is a genetic condition, which interferes with pigment production. Such people have very light skin, white hair, eyebrows, eyelashes. They almost can not stand sunlight (have burns) and eyes are red.
Vitiligo is manifested by white spots on the skin uneven shape and graying of hair. The cause of the disease is unknown.
Neurofibromatosis (disease of the clam") is shown, white hair, white spots on the skin and deformity of the skeleton.
2. A deficiency of vitamins.
In particular, the lack of vitamins A, C, E, B12, and deficiency of para-aminobenzoic and folic acid. It should also examination for worm infestation, which also lead to deficiencies.
3. Stress.
For kid great stress can cause anything: a visit to the clinic, breaking a favorite toy, separation from mother. Gray hair may be the result of severe fright, nervous breakdown. In addition, the very active development program that is not able to withstand the child, leads to fatigue, stress.
4. Disease.
Dysfunction of the thyroid gland (hypothyroidism). In adolescence in girls common cause of gray hair is hormonal dysfunction. Except in cases of endocrine diseases, gray hair in a child can appear as a result of severe acute respiratory viral diseases, diseases of the cardiovascular and digestive systems.
5. The effect of medications.
Newborn gray hair can occur if the mother during pregnancy taking chloramphenicol. Often grey hair appear due to chemotherapy about leukemia.

The appearance of one or more gray hairs, the child, even infants, can be regarded as the norm, but if their too much or graying occurs in bundles, you should always consult with a physician. Not be amiss to determine the level of thyroid hormones and levels of vitamin B12. It is not necessary to pull out gray hairs. If the cause of gray hair is not genetic, it is possible to recover the colors. Need a course of vitamin therapy, to include in the diet more fruits, vegetables and berries. Older children can be given the juice of parsley root. In addition, now there is a special treatment method is mesotherapy. The scalp injections of special solutions. The composition of the solution includes amino acids, vitamins, zinc.