How to make Dua

Dua is a prayer, request, supplication, invocation of Allah. As it says in the Hadith that Dua is the weapon of every Muslim. By Dua you can ask Allah for yourself, for your brothers and sisters, however, should know that Allah will hardly accept a plea if it is not sincere if sinful man, do not follow the Qur'an and is a wrong way of life. 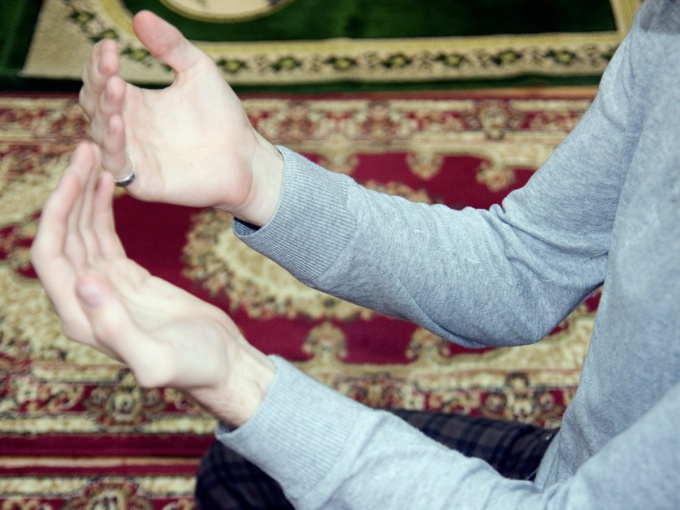 Related articles:
Instruction
1
Cry out to Allah as often as possible, but there comes a time when the probability that God will hear your prayer increases – this time after the prayer and during it, between the azan and Ekamai, when receiving the water of Zam-Zam and before dawn. The most common prayer (Dua) are considered to be Zikr after namaz. How to pronounce them, you will learn below.
2
How to make Dua after namaz?Memorize and repeat after the prayer the following actions and words.
3
Repeat 3 times the phrase "Astaghfiru-llah!", which means that you ask forgiveness from the Almighty.Read the following phrase several times: "Allahumma Antas-Salamu VA minkas-Salam ya tabarakta of s-Jalale Val Ikram". It exalts Allah above all, and speaks of his generosity and greatness.
4
Read the words "Allahumma 'ainni 'Ala strica VA VA shukrika Hosni ybaltic", which suggests that you appeal to the Almighty mention him and thank him for everything once.Read the phrase "Allahumma Sally 'Ala sayyidina Muhammad WA 'Ala Ali Muhammad", which is your request that God will give more greatness and strength to the Prophet Muhammad and all his family.
5
Say the following words "Subhanallahi Val hamdulillahi WA La ilaha the illa-llahu WA-llahu Akbar. VA La VA La haula quwwata illa, billahil ‘Aliy Il-‘Azim. Masha Allah Kena WA mA Lam the expert Lam yakun". They say that Allah is the protector of all Muslim people that he is the only one and no other God that in the world everything will be as God wants and not the other way around.
6
Read after all the spoken words, the above "Ajatu-l-Kursi", which is in the following words:"A uzu billahi Minas-shaytanir-rajim Bismillahir-Rahmanir-Rahim". "Allahu La ilaha illa hual, hayul qayyum, La TA huzhu the sinat-Wal Nahum, stated FIS samawati mA WA mA fil ARD, man Sallai Alfa have 'indahu illa bi iznih, I'm the Lam mA WA mA bayn ideaim khalfahum WA La Whiton bi chayim-min 'ilmihi illa Bima Sha, uasi and kurciuju same-wati Wal ARD, WA La Audeju of hitsuguya ua hoil 'aliyyul 'basics first." These people, according to Muslims, the road to Paradise is plain, no obstacles.
7
Repeat after reading the following:
"Subhan Allah" - 33 times.
"Alhamdulillah" 33 times.
"Allahu Akbar," 33 times.
Add at the end, after reading 1, the following words: "La ilaha illa llah to wahdahu La sharika Lyakh, Lahul Mulk WA of Lahul hamdu WA Hua 'Ala Kulli Shay'in Qadir".Slowly raise your hands to your chest so that the hands were directed upwards, to heaven, to Allah.
Read at the end of every Dua, which does not contradict the Sharia.
Is the advice useful?
See also
Показать еще
Подписывайтесь на наш канал