How to take a penalty

To score from the penalty spot is both easy and hard. On the one hand, you're eleven meters from goal, beat without interference by standing the ball. Prevent you can only the goalkeeper, and even then, only if he's lucky. But on the other hand, nerves that can hinder even the most experienced athletes. So how is it to score a penalty, not summing up the team? 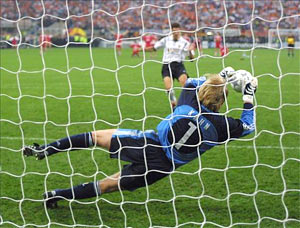 Related articles:
Instruction
1
Don't worry. As mentioned above, anxiety is your biggest enemy. Abstracted from reality. In your world should be only the ball and the goal. Of course, the goalkeeper will not disappear with your mind, but it can easily turn it off from the game, if not beat him.
2
Not tricky. There are, of course, the master of that, punching a penalty, trying to outwit the goalkeeper, for example the famous "Roman" Francesco Totti. However, you can easily outwit not only the goalkeeper but, if you begin to split hairs. Especially when you're trying to beat the goalkeeper with a trick at the wrong time can get nervous and weak to hit the ball. It's not hockey, it's better here for sure.
3
Select the angle. If you are tricky, then directly to hit is not worth it. The goalkeeper is easiest to take a direct shot on goal. Select the angle, right or left, doesn't matter. The main thing - to choose it you need to run. When the whistle has already passed, but you haven't moved at all, you should know exactly which corner hit. Feel free to look in this angle, if you will break strongly into the top corner, no Keeper will not be able to pull the ball out.
4
Hit much. In the corner weakly beating does not make sense – the goalkeeper is easily able to catch or hit a slow flying ball. Without looking at the gate to beat too, not worth it - you can hit by, as they say, "on sparrows".
5
Don't look at the goalkeeper. It so happens that goalkeepers try to distract the kicker. Also bad form is to distract the goalkeeper. It's better to be honest, still an advantage is the kicker, because he knows where he will strike, and the goalkeeper – no.
Is the advice useful?
See also
Подписывайтесь на наш канал