How to bandage a hand

In the case of injury to hands arises the need for ligation. The correct execution of this procedure will allow, if necessary, to create immobility of any part of the limb and fasten the gauze covering the wound surface. 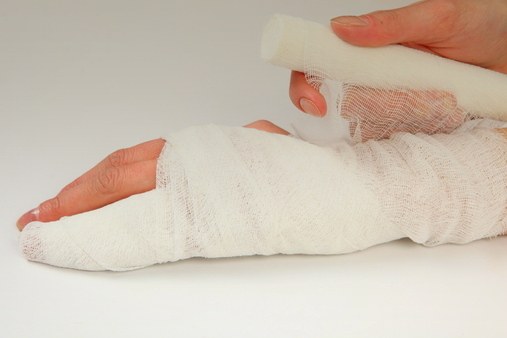 Related articles:
You will need
Instruction
1
For dressing you can use either a gauze bandage, to stop bleeding – only sterile material. The arm should be bent at the elbow, the shoulder is slightly away from the torso. Unwinding the bandage, apply one layer to another with an offset in Passerini. Slowly unwinding, roll the roll of bandage on the skin surface, and do not unzip it in the air.
2
Depending on the purpose perform dressing of different types. When the bandaging of hands you can use a spiral, creeping, circular, cross, turtle and rotating dressing.
3
The most simple performed by a circular bandage. Note that it is not suitable for joints. To impose such a bandage, a small end bandage leave loose and secure it on the second turn. After completing two round, fully overlapping each other, produce a circular tie. Secure the bandage by scoring the bandage and tying the end knot.
4
For ligation of the joint use cross turtle or spicate bandage. Motion upon application of the bandage should resemble a figure eight. For a circular coil in a cross dressing should be the imposition of material obliquely. Then comes the repetition of the circular round and angle the bandage returns to the scene of the first round.
5
The elbow joint while imposing on him the turtle bandage needs to be bent 130 degrees. Take a head bandage in his right hand, and his end to the left. Apply the bandage to the upper part of the forearm and make around it a few rounds of fixing. Cross the flexor surface of the elbow and go to the lower part of the shoulder.
6
Apply the strokes at the shoulder and forearm, gradually began to bring them closer together, after making vosmibratov Perekrestov on the flexor surface.
7
Applying a pressure bandage, make sure that it did not cause circulatory disorders. The end of the bandage when the dressing is completed, cut down the middle and tie the two parts of the node. Make sure that it was not over the wound.
Is the advice useful?
See also
Подписывайтесь на наш канал