How to find the cosine if you know the sine

The sine and cosine is the direct trigonometric functions, for which there are several definitions through a circle in a Cartesian coordinate system, using the solution of a differential equation, using acute angles in a right triangle. Each of these definitions allows us to derive a relationship between these two functions. The following is probably the most simple way to Express the cosine in terms of sine, through their definitions for acute angles of a right triangle. 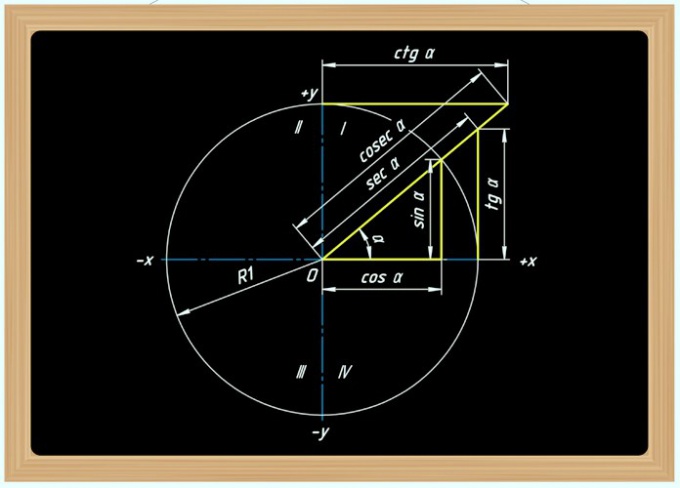 Related articles:
Instruction
1
Express the sine of an acute angle of a right triangle using the lengths of the sides of this figure. According to the definition, the sine of the angle (α) should be equal to the ratio of the length of the sides (a), lying in front of him - the side to side length (c) opposite the right angle is the hypotenuse: sin(α) = a/c.
2
Find a similar formula for the cosine ofa same angle. By definition, this value should be expressed by the ratio of the length of the sides (b) adjacent to this corner (second side) to the length of the side (c), which lies opposite the right angle: cos(a) = a/c.
3
Rewrite the equation resulting from the Pythagorean theorem, so that it was involved in the relationship between the legs and the hypotenuse, derived from the previous two steps. To do this, first divide both sides of the original equation of this theorem (a2 + b2 = c2) on the square of the hypotenuse (a2/c2 + b2/c2 = 1), and then the obtained equality rewrite in this form: (a/c)2 + (b/c)2 = 1.
4
Replace in the resulting expression of the ratio of the lengths of the legs and hypotenuse trigonometric functions based on the formulas of the first and second step: sin2(a) + cos2(a) = 1. Express the cosine of the obtained equality: cos(a) = √(1 - sin2(a)). This problem can be considered solved in General.
5
If in addition to the common solutions you need to obtain a numerical result, use, for example, a calculator built into the Windows operating system. The link to his startup, locate the subsection "Standard" under "All programs" on the main menu OS. This link is articulated succinctly - "Calculator". To be able to calculate using this program trigonometric functions turn it on "engineering" the interface is press Alt + 2.
6
Enter this in terms of the value of the sine of the angle and click interface designation x2 - so you put up the original value in the square. Then enter on the keypad *-1, hit enter, then type +1 and hit Enter again - this way you subtract one square of sine. Click the button with the icon of the radical, to extract the square root and get the final result.
Is the advice useful?
See also
Присоединяйтесь к нам
New advices