How to meet the bride and groom

Currently no one is conducting the wedding as it did 40-50 years ago, but some rituals remained unchanged or was revived from obscurity. One of the most exciting parts of a wedding celebration is a meeting of the groom and bride after they signed the official order. In some places is still not customary for parents of the newlyweds attended the painting. But even if they go there, after the official ceremony, meet youth at home or in the restaurant. 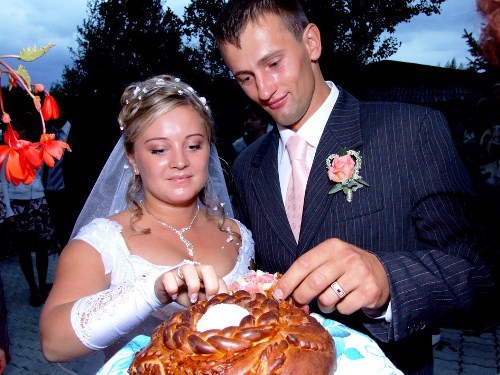 Related articles:
Instruction
1
If after the registry office the couple go to the house of the groom, there they were, according to custom, to meet his parents. Prepare embroidered towel – a large kitchen towel with an ornament - wedding loaf. In the center of the loaf is a special recess, in which is inserted a small salt shaker with salt. Also prepare the icon if you have a believing family. Usually the mother of the groom holds the towel with a loaf, and the father – an icon (although sometimes Vice versa).
2
Say greeting words and invite the newlyweds to take a bite of the loaf with a large piece without using hands. It is believed that the one whose piece is larger and will dominate in the family. But in some cases, young just break off a piece from the loaf, salt it, and feed each other. The meaning is clear: together, they have to eat a peck of salt.
3
Supremacy in the future family can "check out" and thus. The loaf split in half and halves give these to the bride and groom. They must treat them at the hotel. Who was the first to cope with this task, he will head the family. They say that earlier when the bride appeared at the house of the groom, mother-in-law handed her an Apple and asked to throw it over the house. If young it is well managed, it was considered that a future family will live well and richly. Now this is possible only in case if the house is not multi-storey.
4
Another tradition connected with this talisman of family happiness, like a castle. Before the entrance of the newlyweds into the house under the threshold or at their feet lay the open lock. And as soon as they enter my home, then immediately lock the lock and throw away so that no one has found. It is believed that in this case the marriage is strong and unbreakable.
5
In the house of the groom usually brings his bride on his hands if he certainly has enough power for that. This vintage effect, and once it was done, as prevention against the evil eye. Now to explain it, nobody can, but the tradition remained.
6
Finally, after the meeting of the newlyweds invite to your house guests and treat them. Today, as a rule, the main Banquet is held in a specially booked room, cafe or restaurant. Therefore, in the house of the groom, if you go there after the wedding ceremony, you can prepare only a light reception.
7
Sometimes young after the Registrar sent directly to the restaurant. In this case, the main ceremonies are held at the entrance. Agree on who will meet the groom and the bride. It can be mom and dad of the groom (after all, their family circle is taken by the bride) or all parents and interested guests. After an appropriate solemn words, as a rule, the newlyweds sprinkle of grain, coins and candy. The essence of this ritual is to house a new family was rich and lived in it sweet.
8
But bread and salt to the bride and groom can bring and glasses of champagne, which they can drink or SIP, and the rest of the contents to irrigate guests. Empty glasses are thrown over the left shoulder. It is believed that they are fighting for happiness.
9
It is now not uncommon – meeting newlyweds volleys of rockets or firecrackers, shedding their flower petals and confetti, sprinkling the track under the feet of various large grains. They arrange and competitions testing to determine what will be the future family. But whatever the tradition, the main thing that at the festival there was an atmosphere of joy and happiness.
Is the advice useful?
See also
Присоединяйтесь к нам
New advices