That symbolizes the bread at a wedding

When the couple crossed the threshold of the parental home, mothers traditionally come out with fluffy Golden wedding loaf, elaborately decorated with flowers and figures out of thin dough. To the couple lived in love and abundance, they have to nip off a piece of wedding loaf, dip it in salt and feed each other. 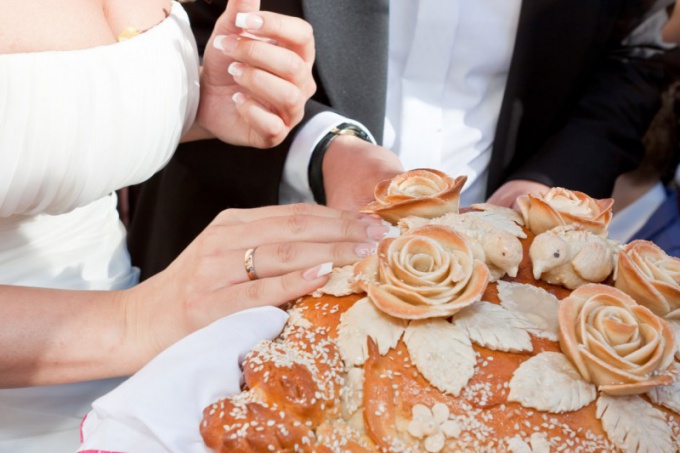 Related articles:
The tradition of offerings to the newlyweds bread and salt is very symbolic, since ancient times it is considered the best way to protect her family, since bread is a powerful talisman, a symbol of prosperity and the hearth. Salt is considered a universal remedy against evil spirits. Loaf tray on rushnyk – embroidered towel. It is believed that the young life should be as smooth as the surface of the towel.

That symbolized the wedding loaf in the old days

The tradition to give newlyweds a loaf is rooted in hoary antiquity. In Ancient Rome, the bride and groom became husband and wife without once ate a piece of round cakes, mixed with salt water and honey. Pieces of cakes the bride and groom gave each other at the same time, when several witnesses. Russian wedding loaf is a descendant of the ancient Roman honey cakes.

The round shape of the bread anciently symbolized the Sun or the pagan God of the Sun, which was considered the main protector of the Slavs. According to legend, the Sun God descended on earth to bestow upon the newlyweds, entering into a happy family life, with its affection. Since that time the designer was a symbol of fertility and prosperous life.

In the old days the loaf has an important role in the ceremony of offering gifts to the young. Cousin first took and tasted a small piece of the bread, and in gratitude he was given the newlyweds. Divided the loaf godparents, and the children carried the pieces to the guests. It was worthless to go with wedding home without a piece of loaf. It was believed that the one who will taste wedding loaf will have good luck in all your endeavors.

That symbolizes the wedding loaf in our days

In our days the hospitable tradition of the wedding was preserved. As in the past, parents meet the bride and groom ruddy loaf in hand-embroidered rushnyk. It is believed that the loaf lush and beautiful, the richer and happier you will be after tasting it, the couple.

Modern loaves are decorated with beautiful patterns of thin dough: flowers, cones, berries, wicker hearts, rings, birds. Flowers on the loaf symbolize the purity of the bride, spikelets – the welfare and prosperity of a young family, berry is strong and strong love, wicker hearts, rings and the birds – the loyalty and devotion of the newlyweds to each other.

Young partake of the wedding bread in the middle, this tradition represents the beginnings of a new life and is soon to have couple of children. The dividing of the wedding loaf into pieces symbolizes the loss of virginity. Decorating with loaf handed out to unmarried girls. It is believed that if she received and tasted this decoration, soon she too will marry. There was a belief that if an unmarried girl put on the night under the pillow a piece of wedding loaf, in the dream, she will see her future husband.

Since ancient times, the loaf was identified, the status of future family, so he tried to make the most lush and high. The rich weddings you could see the huge loaves the size of a Desk. At times the loaf rose high, and was so lush that it was impossible to pull out of the oven and had to take out of the oven laying a few bricks.

Baking loaf were invited caramanica – married women living with their husbands in good and harmony, love and happiness, which was responsive and hard-working children. It was believed that karavanic bestow family well-being and a young family. Baking the loaf, the women sang ceremonial songs, inviting good luck and happiness in the house of the young.

The tradition to bake a wedding ritual bread typical of all Slavic peoples. Ukrainians and Belarusians also exist loaf agate traditions of the Tatars to the wedding Gubadly bake – a cake of puff pastry, ritual significance, which is fully identical to the loaf.
Is the advice useful?
See also
Присоединяйтесь к нам
New advices