How to remove the screw

In the household often have to deal with minor repairs. To fix the faucet, go door to repair the washing machine or the vacuum cleaner – the range of possible tasks is wide enough. During the repair, sometimes you have to face a situation when you need to Unscrew the old one, firmly stuck, the screw. 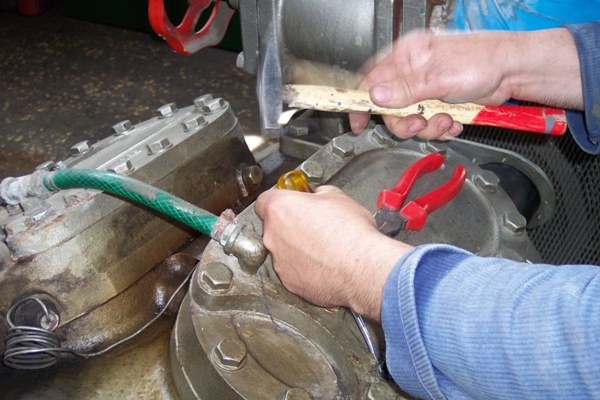 Related articles:
You will need
Instruction
1
If the screw cannot Unscrew, and you're afraid to disrupt the screwdriver to his head, try to use the following methods. If you allow the mechanism to which it is screwed up, tap the screw with a hammer, and substituting to it from different sides of the screwdriver. Due to strikes in the region of the thread cracks appear that can facilitate the twisting of the screw. When there is not enough power to move the screw and screwdriver scrolls in the hands, catch it over the flat part of the wrench. With this lever you will have a multiplier effect applied to the screw force.
2
A good option is the heating of the recalcitrant screwand or boltand in the flame of a blowtorch, followed by cooling with water. This method also provides the appearance of microcracks along the thread due to the thermal expansion during heating and contraction during cooling. Of course, this method is not so often, since not every detail can be heated in a similar way. Alternatively, instead of a blowtorch, you can use a soldering iron or heat gun, this option is suitable for small screws.
3
If it is impossible to Unscrew the screw should fill it with turpentine or kerosene. If the screw is oriented vertically, make from clay rim around it and pour the kerosene into the formed tray. Please wait one hour and try again to Unscrew the screw.
4
In some cases radical option – head screwand is cut down with a chisel, the threaded part is drilled if necessary.
5
If you are trying to Unscrew the old bolt and stripped the wrench facets of his head, followed by the hacksaw (or just a piece of the saw blade) to prepare the head smaller. Enough to saw off the two faces. Then fill the bolt with kerosene, leave for an hour, and then try to Unscrew.
6
A large bolt to try to loosen with a hammer and chisel. Put the chisel to the bolt head and try to hit it with strong blows of a hammer. In many cases, this fails and then the bolt can be unscrewed with a wrench.
7
There is the electrochemical version of the old loosening the screws and bolts. Make around the head of the screwand the rim of the clay, put into the resulting bath a piece of zinc, and pour dilute sulphuric acid. Forming a galvanic element in which the rust will actively dissolve. A day later you will be able easily enough to Unscrew the stuck screw.
8
Make it a rule when installing new equipment, however they were not to lubricate the screws and bolts, which in the future may have to twist it. Use a graphite grease even after several years of being in very adverse conditions protected so the screw will easily unscrewed.
Is the advice useful?
See also
Присоединяйтесь к нам
New advices