How to build a longitudinal profile

The question of how to construct a longitudinal profile may arise in the design and construction of roads, laying ski tracks or trajectory on certain route. It is a projection of the axis of the road, highway, route, on a vertical surface passing through their axis. This is only a scan on a vertical surface, so its projection on the horizontal plane can be both direct and meandering line. 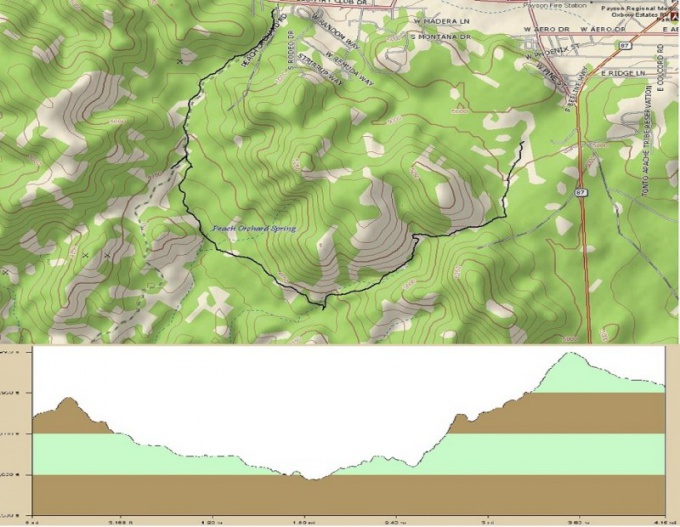 Related articles:
You will need
Instruction
1
To build a longitudinal profile you can using any topographic map of the area where the designed road, highway or route. She must have a certain scale and elevation, expressed in contours. The larger the scale of such a scheme, that is to say, you will design the longitudinal profile.
2
Apply the axis of the road or the route of the path on the diagram to simplify the task, break it into short straight segments, each of which measure a ruler with millimeter divisions. Number the nodal points of the route. Measure each cut with precision to tenths of a millimeter. Write down the length of each segment on a separate sheet, add up and determine the total duration of the route are in millimeters. Knowing the map scale, determine its length in kilometers.
3
Mentally follow the printed route map and determine minimum and maximum elevations at which it goes. You can use different values of scales for the horizontal and vertical axes, it will increase the visibility of the projected longitudinal profile. Normally, the vertical scale is taken to equal 1:500, and the horizontal 1:5000. Select them in such a way that the length of your profile fit on one, maximum three pages in length, to him it was convenient to work.
4
Draw on the sheet in the vertical and horizontal axis. For convenience, they can be marked up in accordance with the selected scale. On the horizontal axis, plot the route points from start to end, consistently putting them. On the vertical axis delay of the elevation values of each point of the route, which define a topographic scheme to which it is applied.
5
Connect these points and you will get a longitudinal profile of the route or routes. By measuring the lengths of segments along the contour of the profile, you will be able to determine the actual length of the route, which is due to the effect of the terrain may differ considerably from that which was measured on a topographical map.
Is the advice useful?
See also
Подписывайтесь на наш канал