How to melt the samovar

Device for heating water, combining the water pot, the pan, the pipe passing through the vessel, known since ancient times. However, in Russia it is the device adapted for tea. At the end of the XVIII century in Tula there is a production of the samovar, and he soon becomes a true symbol of Russia. 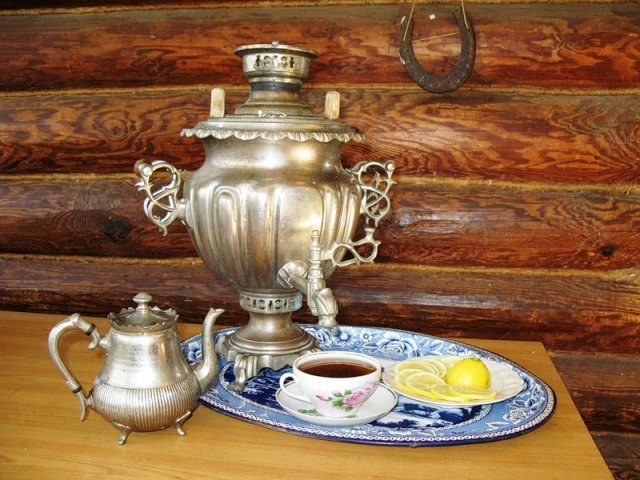 Related articles:
You will need
Instruction
1
Use for burning samovar charcoal: coefficient of performance in this case will be about 70%, when using wood about 15%. Prepare a few bundles of kindling - thin sticks of birch, spruce or pine. The length of the splinters of about 40 cm, thickness - 2 mm. Link splinter into bundles with a thickness of about two centimeters.
2
Light the samovar in the open air or indoors, where you can output the pipe of the samovar. Typically, these l-shaped pipes were taken in the chimney of the hearth (Russian oven). Put it low enough, for example, on the stump, the better to lay the fuel.
3
Open the lid of the samovar and pour water to the top. It is important to fill the water container completely, otherwise when heated samovar can raspalsya in those places where it remained without water. Close the grid under the samovar large pieces of coal, take the beam of a torch, light it and lower the flame in the pipe, then immediately pour a small portion of the coal and slip the pipe.
4
Watch when will ignite the first portion of coal and it starts to smoke, remove the pipe and add the rest of the coal. Do not go to sleep all the coal at once, and do not try to fill the entire flame tube fuel: this will obstruct the passage of air and reduce the combustion.
5
Determine when the samovar was boiling before boiling it starts to make noise, in a moment of boiling - simmering. When tapped on the side of the street from not boiling water emits a sonorous sound, and boiling water is deaf. With the right kindling a five-liter samovar to boil about ten minutes.
6
Remove the pipe from the samovaras soon as the water boils, close the flame tube lid, move the samovar on the table and put the tray (copper, tin or brass). After use, remove the residue of ash and small embers, opening a small hatch in the bottom of the furnace. The bulk of the burned fuel tap, turning the samovar upside down. If it is stoked with wood or pine cones, clean flame tube brush, removing tar and soot.
Is the advice useful?
See also
Подписывайтесь на наш канал