Tea brew is the best marinade for skewers

Do not spend money on expensive exotic fruit to marinate their meat for barbecue. The most common black tea has all the necessary acids and enzymes to soften the meat fibers. 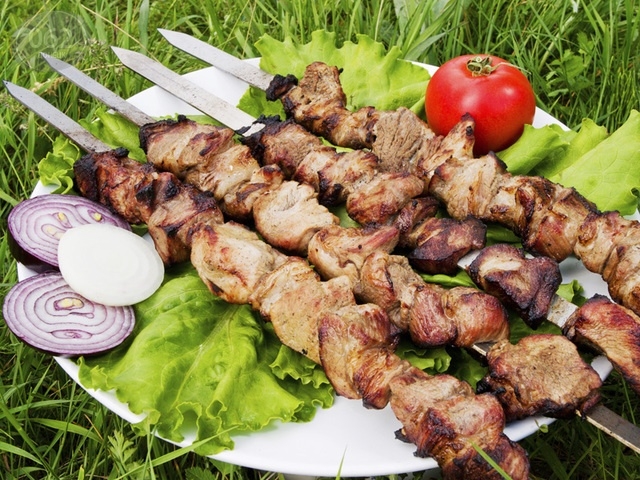 Marinades for meat destined for the barbecue, today does not count. Mostly used acids (acetic, malic, citric) or acid fruits (lemon, kiwi, pineapple, papaya), because they contain enzymes that soften meat. However, the easiest and cheapest way to marinate is a regular black tea leaves. Effective the destruction of the muscle fibers of meat with strong brewed tea leaves is because of a chemical compound of the drink is estimated three hundred, among whom also is an organic acid. Moreover, dry tea leaf is produced by oxidation of up to 80%.

One can choose to marinate their favorite variety of tea is at your discretion as a sheet and granulated. Well, if the brewed tea is quite astringent, but without bitterness. Per liter of boiling water is taken as a rule, 50 g. welding. Need to brew so much tea to be prepared for kebab meat was completely covered with marinade. 3-4 kg of meat will take 2-2,5 liters. Tea marinade is cooked before slicing the meat into portions, because he still needs to cool to room temperature.

Pork, lamb, or young beef cut into pieces weighing 40-50 g, sprinkle with salt, mixed with roughly chopped onions (2-3 medium onions per 1 kg. of meat), thoroughly mixed and poured the strained tea. However, not every cook feels the need to add salt once, and some salt and added spices after tea marinade will be merged. I must say that it does not affect the taste of the future of barbecue.

As spices can be used coriander, though the tea itself plays the same role. In the kitchen of China and Burma, the dry tea is ground to a fine powder and used in mixtures with salt and garlic as seasoning for different meat dishes. Therefore, the simultaneous use of salt and spices in the tea leaves is justified. But just pour prepared marinade the meat enough, you need to mash it well with hands. After that, you can a container of meat cover and put in a cool place (refrigerator, balcony, cellar) for 4 hours.

You can make a preset for barbecue and much sooner than 4 hours for roasting. The advantage of the tea marinade is that the meat in it won't fall apart the fibers, as occurs under prolonged exposure to kiwi or pineapple. Because it will have to marinate the night or the day, will not be worse. On the contrary, the barbecue will turn out tender and juicy. After the desired time, the pieces of meat to be removed from the marinade, pressing lightly in hand and string on skewers. Prepare a barbecue for 20-30 minutes.

During this time, the well cut a half rings or rings of onion and place it in the vinegar marinade (1 Cup of water 0.5 tsp. salt, 1 tsp of vinegar), then apply it to the skewers. Experts say that this is the right addition to the kebab, and not a mixture of mayonnaise with ketchup.