In the game "Minecraft" the player has the opportunity to visit parallel worlds, you can get there with the help of special portals. When using mods, the number of worlds and portals increases. However, to play in the ordinary world and use portals to Hell or game Ender, fashion is not needed. 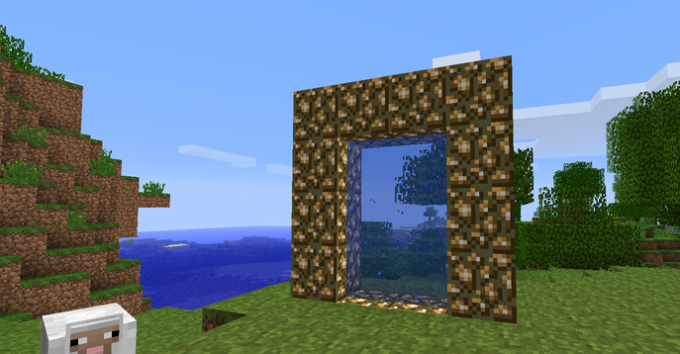 Without using any mods, you can build the portal from any place on the map of the city. The essence of such a portal is that: to get from the ordinary world into a gaming Hell, the player can use any portal, but you teleport out of Hell back it will always return to the portal created by the first.

How to make a city in Minecraft

First you need to create or find a settlement. Existing villages can be caught in the desert or on the plains, we can only find one. You can build your city in order to do this, you need inventory to find a brown egg and throw it on the ground in the chosen place for the construction. From the egg hatches a resident of the village. The bigger the city you want to build, the more eggs you want to use.

When the desired number of residents recruited, the player can leave and do other things while the inhabitants erected a new city. Through the day you can return – the city will be ready.

How to make a town portal in Minecraft

When the city found or created, you can start building the portal. First you need to create a portal from city to gaming Hell. The important point is that this should be the first portal to Hell built player on this map.

For the construction of the portal to the lower world need the obsidian. It is possible to get if you pour water at the lava. The player will need to have a bucket of water and a diamond pickaxe (weaker obsidian not to break) and go underground. Flooding the land with lava, you can proceed to the extraction of the blocks, which will require 20 pieces.

Coming out of the dungeon, you can start building. At the place you need to make a monument with a size of 4 by 6 blocks. The portal is ready, it remains to activate it. This will require flint and a bar of flint, which is created from flint. With it you can activate the portal by clicking with the right mouse button.

The player has created using the portal to teleport to hell, and to equip the portal with some non-combustible material. Then return to the ordinary world and go to his home (or any place where you need to build a town portal) and create another portal to Hell.

How to activate the portal in the city

If desired, the player can create several portals to Hell all over the County, they will teleport it to the same point of the lower world, from which he will return to his first built the portal.